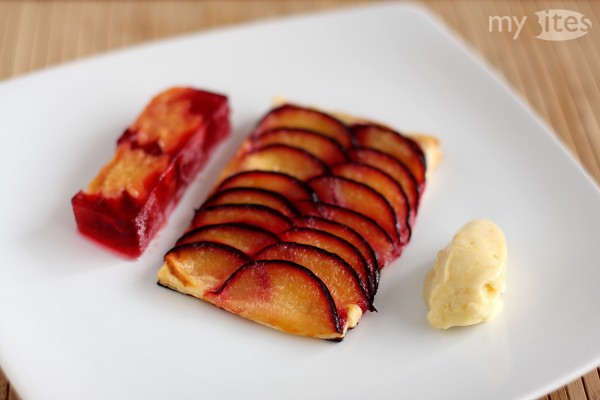 I admit, the amount of terrines was quite high in the last few month, so this might be the last one for this year. My idea was to have two separate colors which should clearly be distinguishable when the terrine is sliced. Because all red and blue color is kept in the skins of the damsons, I peeled them and soaked the skins along with ginger and lemongrass in a simple syrup. This became the red gelatine which surrounded the yellow peeled damsons. To this room temperature terrine I included a hot and a cold element. From the greengages I made a simple sorbet tweaked by some fresh coriander seeds. For the hot element I baked a simple tart with a puff pastry base, spread with marzipan and covered with a layer of thinly sliced plum. Marzipan and plum really works great together, as does fresh coriander with greengages, or ginger and lemongrass with damsons. The final result turned out just as I planned with a lot of pleasant contrasts: hot and cold, creamy and crispy, sweet and sour, dense and refreshingly light.