Apricots belong to a special group of fruits. While most fruits loose more or less flavor when cooked, for apricots actually some gentle heat really enhances and helps to develop their flavor. Therefore it is always wise to bake or cook apricots before any further use. Or – if there is no time – just simply toss with some brandy or schnaps and flambe. For baked apricots you can either leave the skin on (and remove easily after baking) to get a more vibrant sour and tart note. Otherwise briefly blanch the apricots in hot water and peel them. For this current recipe I removed the skin because I didn’t want to have too much tartness in the end result. I baked the apricots at low temperature on a herb bed which enriched its flavor and took it in a savory direction. The original idea for the herb baked apricots itself is based on a recipe from German 3-star chef Juan Amador‘s cookbook. I’ve already prepared it several times and always tweak on the combination of herbs and the preparation. E.g. removing the skin before baking is clearly a better choice. The apricots pair really well with liver or mushrooms. In this recipe I incorporated them in a terrine, which can be used in multiple ways. 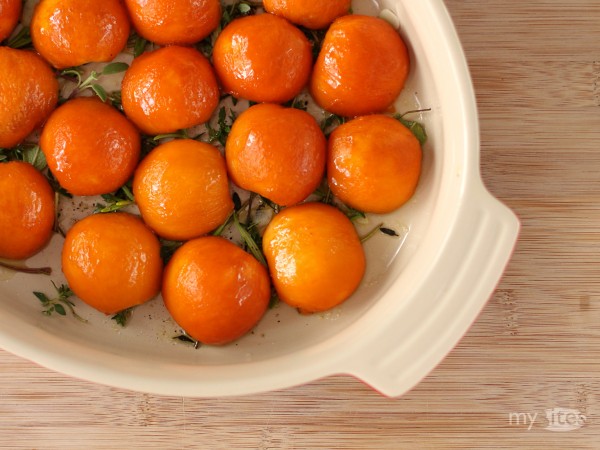 The idea for the terrine is based on a recipe from Swiss chef Tanja Grandits‘ cookbook. She created a tomato “cassata” made of half dried tomatoes and gelled tomato juice. I switched the half dried tomatoes to herb baked apricots and the tomato to bell pepper juice. Yes, bell peppers work great with apricots. Bell pepper is basically sweet, adding one or a half baked apricot to a bell pepper coulis or soup really enhances the fruity tones of the bell pepper and adds the missing final touch. The terrine below is another nice example for the combination of bell peppers and apricots. It can be prepared one or two days beforehand, covered in clingfilm and refrigerated it keeps several days. And, there are multiple possibilities for its use (e.g. see below for an example with mushrooms). Only two things are very important: always slice the terrine cold with a very sharp knife and before serving allow it to reach room temperature. Otherwise the flavors just can’t develop. 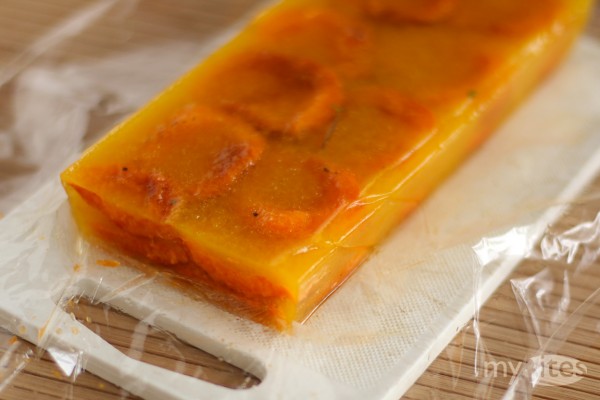 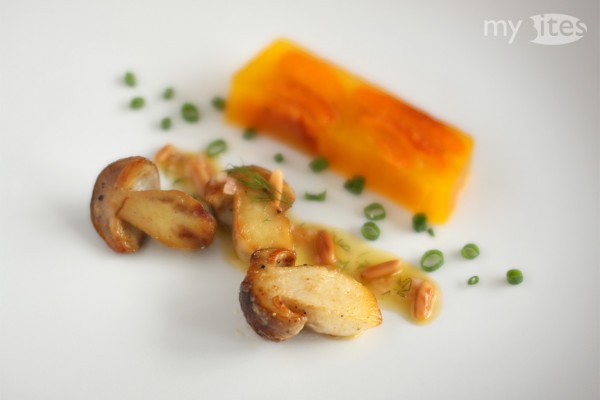 Besides bell pepper or liver, apricots pair really well with the sweet taste of mushrooms too. For this current appetizer I sautéd some fresh ceps in butter until lightly browned. The dish was completed by dill-vinaigrette and some scallion rings. Altogether it is a seasonal and very fresh appetizer for hot summer days.