While peeling and cleaning a pumpkin or butternut squash, the skin and the seeds usually get discarded. From one point of view this is somehow understandable, because neither the hard skin, nor the stringy seeds have a pleasant texture. On the other side, they are edible and contain a lot of flavor, so it would be favorable to use the “waste” somehow. I had the idea to add the discarded pumpkin seeds and skin parts to a vegetable stock. The resulting orange colored stock can be added to a butternut squash soup, used for cooking pumpkin cubes or cylinders, which might also be blended into a fine puree – or for making this ultimate butternut squash risotto. 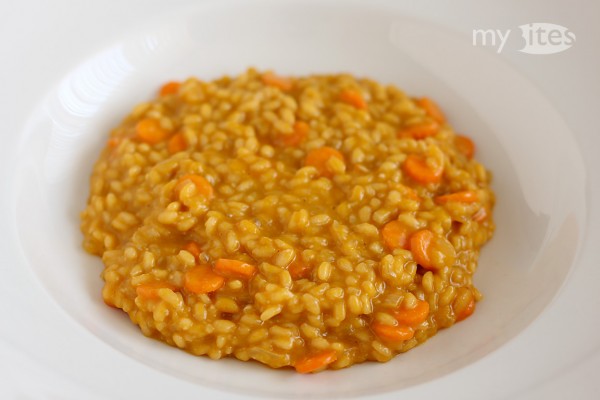 This is another recipe I created for this months Hungarian food blogger contest held by Zizi. The topic was to cook vegetarian dishes with pumpkin or butternut squash. Because the dish had to be vegetarian I was not allowed to use chicken stock for the risotto, so this was another motivation for me to enrich the base vegetable stock with flavor – in this case from the discarded parts of a butternut squash.

In this dish I used several components and textures to make the risotto more interesting. The squash itself is present in four different variations: a stock and a puree (both of them are responsible for the nice orange color of the risotto), small soft discs and more al dente halved cylinders. For making the puree I used rooibos tea, because its caramel taste really enhances the butternut flavor. I added the raw small squash discs just before finishing the risotto. A couple of minutes were enough to soften them, but they still kept their shape and didn’t fell apart. This idea was inspired by the lobster risotto I tasted at the Onyx Restaurant in Budapest, Hungary, where they added small disks of asparagus to the risotto and served the asparagus tips separately as garnish. 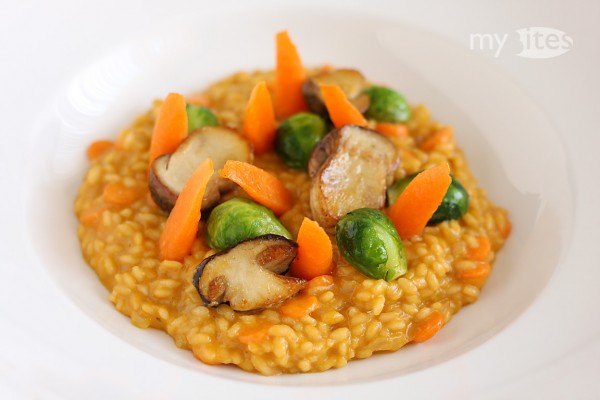 While continuously stirring the risotto I additionally flavored it with star anise, orange and lemon zest. You could add a cinnamon stick or ginger too, but I skipped them, because I didn’t want to have their heat in the final result. I removed the aromatics before stirring in the butter and the cheese. Many recipes advise to use freshly grated Parmesan for risottos. I think goat cheese works better with butternut squash, so I used a Pecorino like hard cheese made from goat’s milk. As an autumn inspired garnish I roasted some ceps and Brussels sprouts, which added complementary flavors and textures to the final risotto.
[amd-zlrecipe-recipe:18]