In the northern part of Germany “Grünkohl mit Pinkel” is a traditional winter dish. It is basically a combination of kale (in German “Grünkohl”), oatmeal, onion and a smoked pork sausage made with oatmeal called “Pinkel”. You can find this dish at almost every winter festival like christmas markets, where it is prepared continuously in huge steaming pans. The main advantages of this dish are, that it is made completely from local produce, it is very simple to prepare, scales well and reheating is no problem either. It is also very stodgy and warms well on cold winter days. I thought that this traditional dish could be easily transformed into a more elaborate version by rethinking some of the main components and by restructuring the dish. Below you see my result. 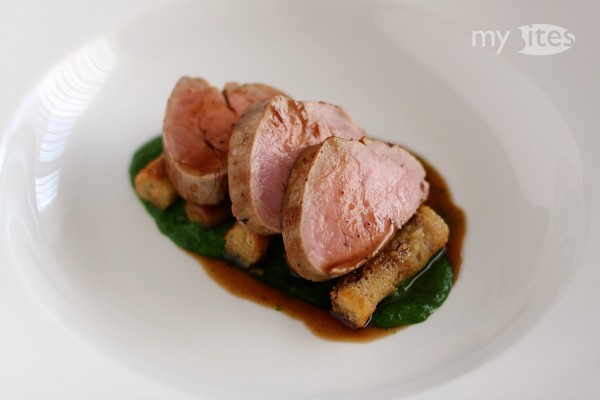 One of the main ingredients, namely Pinkel is actually so local, that it is unknown and impossible to get outside of North Germany. Thinking about a replacement I had the idea to cook oat dumplings and cut them into small sausage-like tubes. First I baked an oat bread replacing 20% of the wheat flour by freshly ground oat. On the next day, I diced the bread and dried it in the oven. This was a necessary step, because otherwise the dumpling base would have been too wet and mushy when I added the eggs and the milk. Right before assembling and serving the dish, I roasted the dumpling tubes in butter which resulted in a nice crunchy outside and soft interior. 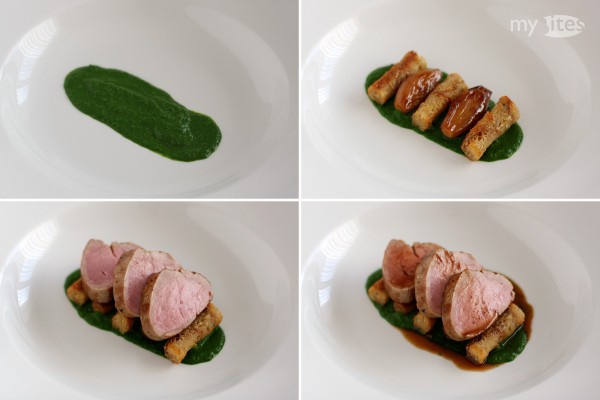 Since the Pinkel sausage contains pork meat, I used pork tenderloin and a sauce made from pork stock as a more elaborate replacement. I prepared the kale as a puree with some garlic, which resulted in a spinach-like garnish. Since onions are a major ingredient in the traditional recipe, I braised some shallots. To add some freshness I added a small amount of vinegar to the shallots. Since I skipped a large amount of fat originally contained in the Pinkel sausage, my new transformed version of “Grünkohl mit Pinkel” turned out much lighter and more easy to digest than the traditional one.
[amd-zlrecipe-recipe:31]