In my previous post I gave a short review of the renewed Foodpairing website. In a short tutorial I went through all options of the Foodpairing Explorer and simultaneously created a combination of ingredients featuring poppy seeds, banana, turnip, apple and camomile. First this combination might sound a little bit weird, but if you take a closer look, they actually make sense together. Poppy seeds aren’t very sweet but slightly bitter on their own. Banana used as chips are less flavorful and less sweet compared to the raw fresh fruit and it contributes a nice crunchy texture too. Apples can be tart, turnips are actually very sweet and while they are both crisp, their consistencies differ. So to sum up, every main flavor and many different textures are present in the aforementioned combination, which is the foundation of creating an interesting vegan dish based on them. 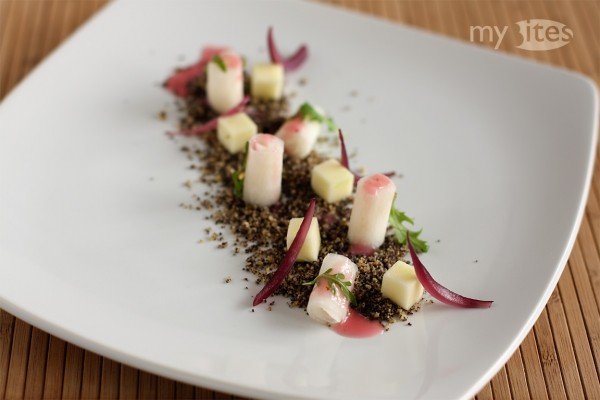 Freshly ground poppy seeds have a texture similar to sand, which has a less pleasant mouthfeel if consumed purely on their own. My idea was to mix the ground poppy seeds with banana chips to get a “poppy seed soil” as the ground layer of my dish. Many restaurants offered or still offer “vegetable garden” dishes, where the “soil” is usually based on Pumpernickel (rye bread), sepia colored bread or ground dried olives. Though this poppy seed soil is a little bit more dry as usual edible soils, it can be prepared within seconds.

After pouring a ground layer of the banana-poppy seed soil on the plates, I arranged some tart apple cubes on it which were decorated with strips of red wine marinated onions. I added the red onions, because I missed something slightly spicy on the plate and I didn’t want to include pepper in the poppy seed soil. For preparing the red wine onions, I adapted a recipe from Ákos Sárközi, chef of the Borkonyha (Winekitchen) Restaurant in Budapest, Hungary. He cooks the onions sous vide in sweetened red wine. Since I don’t own any sous vide bath or vacuum sealer, I used small jars instead. Unopened they keep several weeks in the refrigerator.

The turnip strips were a little bit tricky. The consistency of dense vegetable tubes is very distinct to thin strips rolled into cylinders. It’s like a difference between a shortcrust and puff pastry. So after peeling the turnips I cut long thin strips by constantly turning the turnip. Before serving the dish, I steamed the turnip rolls over camomile for a few minutes, which enriched the rolls with a flowery and very interesting note. Finally, I decorated the rolls with small rocket leaves and pomegranate vinaigrette.

Usually I don’t post shots of my second plates. Decorating the first photo plate sometimes takes 5 to 10 minutes – especially if I get new ideas while I’m plating the dish and start over with a new plating. Therefore I always warm or chill my plates, so the food won’t get cold or melt when I sit down to eat after I finished taking the photos. Plating my second turns takes much less time and usually results in a more chaotic arrangement. For this recipe the second plate is more scattered, although I think it still looks quite good. The difference between the image above and below is that plating the first took me 5 minutes while latter was plated in about a minute. Though I have to add that while arranging the first plate I was still thinking about where to place some elements. In the end, I think both platings are acceptable. Which one do you prefer? 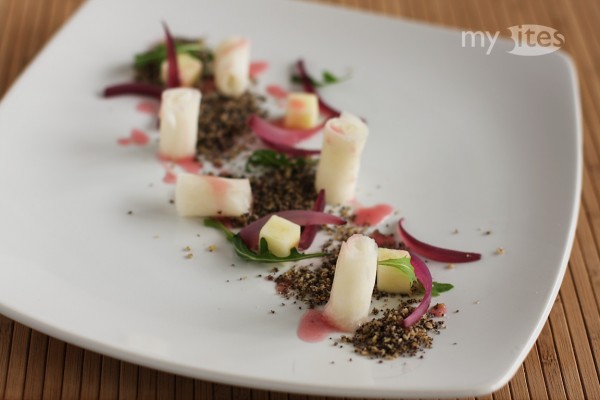