5am. The sun is slowly rising from the horizon. Birds sing free and undisturbed by traffic noise. Everything is calm and quiet, almost nobody is on its feet at this time of day. Except for the asparagus pickers. After uncovering the ridges, they start searching for asparagus tips which barely reach the surface. It’s a hard, yet filigree work. I wanted to learn how asparagus is actually grown and harvested, so I visited my asparagus farmer – the Reinhardt family – on an early morning to join them in the picking process and to learn more about the king of spring vegetables firsthand. 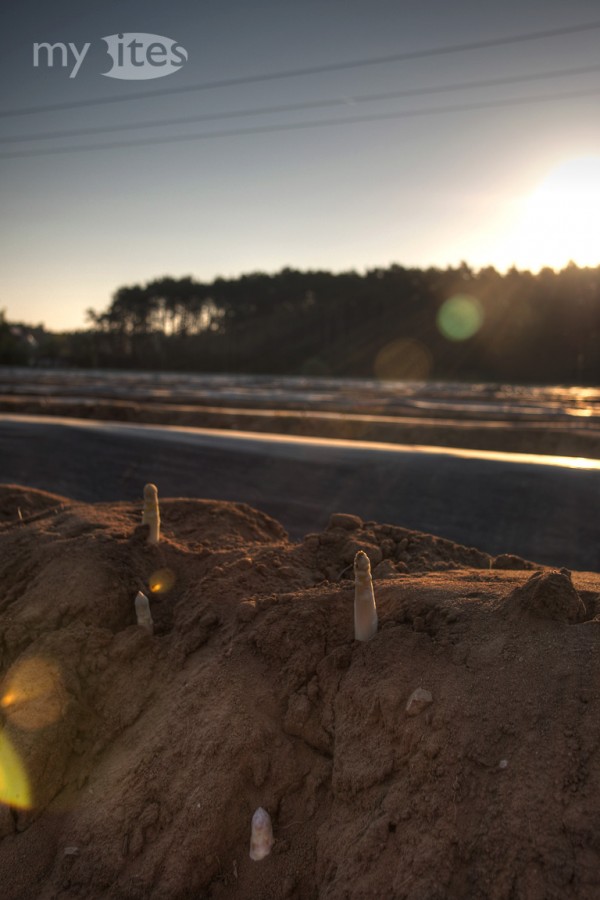 Recently, white and green asparagus became quite popular in Hungary. Here in Germany the tradition of cultivating, harvesting, and enjoying asparagus reaches back to several centuries. One of the most famous asparagus regions of Germany, Franconia lies directly in front of my doorstep. Asparagus is grown on 200 acres of land in and around Erlangen, the town I live in. In Bavaria at total more than 6400 acres are used for asparagus production. Similarly to other asparagus farmers, the Reinhardt family has passed on the tradition of asparagus cultivation over several generations. 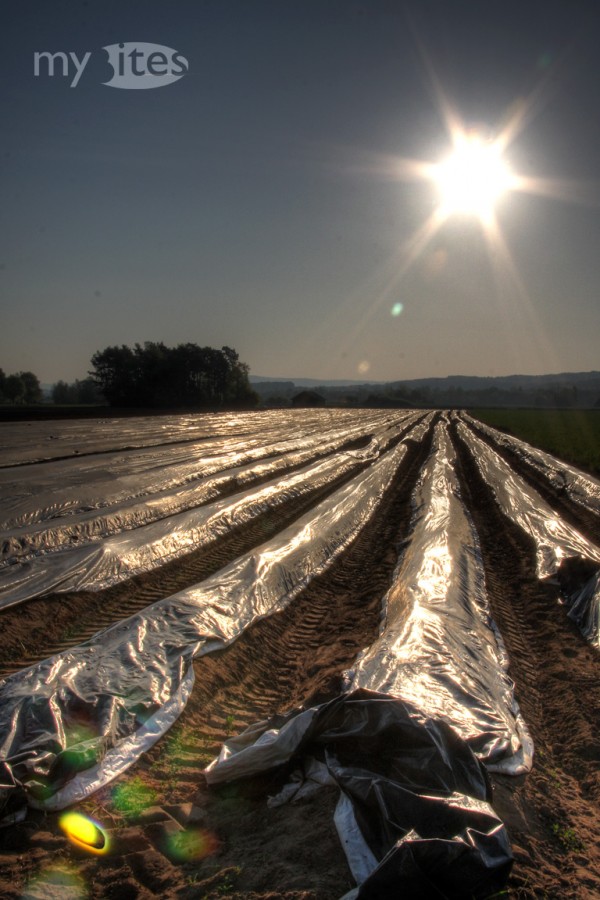 Although several different asparagus varieties are grown such as green, purple, thai or wild asparagus, the most popular by far is the white asparagus. Growing white asparagus is actually a “tricky” procedure. In early spring, ridges of 30-50 cm height are built upon the root system of the asparagus, forcing it to grow a longer distance until it reaches the surface. Due to the lack of sunshine inside the ridges, these stems stay white. The discoloration to purple and green occurs only after the asparagus has reached the surface.

Growing and harvesting asparagus is very labor-intensive – and not only during the 6 to 8 weeks, when the white asparagus is picked on a daily basis. Before any asparagus can be harvested, seedlings need to be planted and allowed to grow wild and untouched for 2 to 3 years. Afterwards, asparagus can be picked for about 7 years and subsequently the land has to be cultivated with a different fruit. The work on the asparagus fields usually starts in early March, when narrow corridors are eradicated from the root network in the soil and ridges of 30 to 50cm height are stacked up between them. It’s very important to use loose and sandy soil for the ridges, so the asparagus can grow quicker and the sun can warm the earth more easily. For controlling the heat, long foil strips started to appear 10-15 years ago. One side of them is white, the other black. By turning the foil according to the current weather, the temperature can be raised or lowered in the ridges. The ideal temperature for asparagus is around 18-22°C at 20cm beneath the surface. Under these circumstances asparagus can grow up to 5-7 cm per day! Some asparagus farmers became so advanced, that they actually planted sensors into the ridges at different levels, so they have the ultimate control over the temperature around the clock.

Picking asparagus is among the hardest and most backache-causing activities in farming. Although machines have been invented to pick white asparagus automatically, they still require about 5 people for operating. In the same time 5 pickers can clean the field by being far more precise and hurting the asparagus much less during the procedure. Some German families still pick their asparagus themselves, but many employ seasonal workers from Poland, Romania or Hungary. During the harvesting season picking starts at 5am, and on warm days white asparagus has to be picked in the afternoon heat as well. There are no free days during the harvesting season (not even Sundays), which lasts about 6 to 8 weeks for a single field. Picking once or twice every day is necessary because asparagus, which has reached the surface, turns green very quickly, and under foil the tips simply get grilled in the hot sun. The picking procedure itself is quite simple, yet requires sure instinct: First, the picker searches for asparagus tips which are raising the soil at the top of the ridges. Then the soil is swept away around the tip so the picker has a sure grip on the asparagus. Next a long blade is inserted below the tip at about 30-40 cm depth and the asparagus is trimmed off from its root network. Handling the picking knife well is crucial, because by hurting other asparagus stems nearby, the picker could accidentally kill the harvest of the next days. 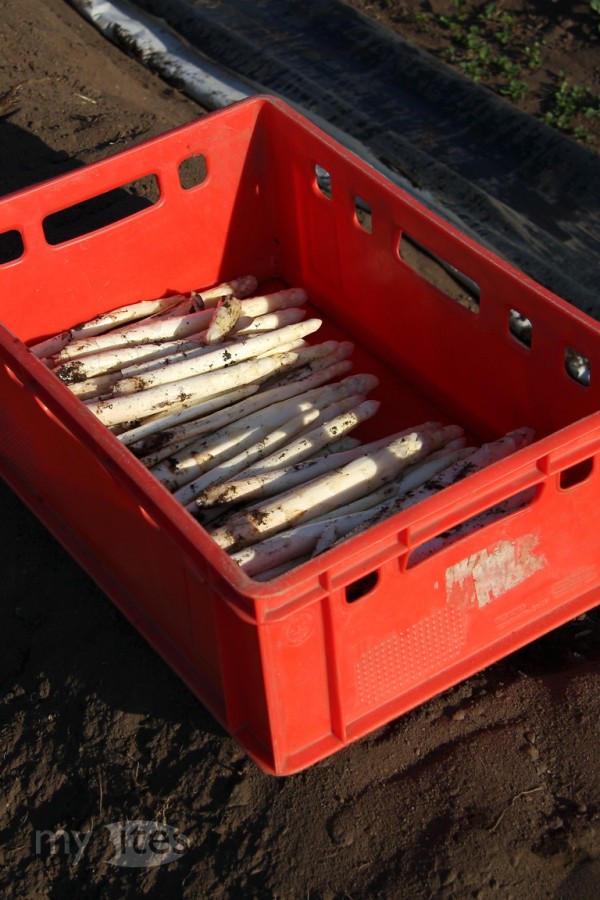 In Germany, white asparagus is picked traditionally from mid April until midsummer night (June 23-24). On some fields asparagus starts to grow earlier, while the harvest on other fields could start only later during the season. White asparagus is picked not only according to a fixed date, but actually as long as its resources aren’t depleted. From a point of view, harvesting white asparagus is a very cruel procedure. The asparagus plant is fighting for its own survival by growing stems against the light. Only via the sunshine and the photosynthesis can it develop sugar, extend its root network and store energy. By picking the white sticks from the plant, the pickers are actually trimming off any means of survival for the asparagus. No wonder that the energy reserves of the asparagus are depleted after a certain amount of time (around 6 to 8 weeks) and harvesting needs to stop to allow the asparagus to regain its strength for next year’s massacre. For this regeneration process the ridges are leveled and the asparagus is allowed to grow and live freely. In November the green stems and leaves of the asparagus are cleared.

After the asparagus has been picked, it has to be transported to a cool place as quickly as possible. There the asparagus is washed and cleaned thoroughly in cold water and trimmed to equal length. Concerning this cleaning procedure, it’s impossible for really fresh asparagus to be woody. Only asparagus, which has been transported over long distances or stored improperly, turns woody. So buying asparagus as locally and as fresh as possible (preferably picked on the same day) is crucial for the best possible quality – just like with any other vegetable. Day-fresh asparagus can be peeled very easily and has a thinner skin compared to stored ones. During storage the asparagus starts to dry out from all sides and especially at the trimmed end. If asparagus needs to be stored for 1 or 2 days, it’s best to keep it in a cold and slightly wet environment, such as in the refrigerator wrapped in wet cloths. 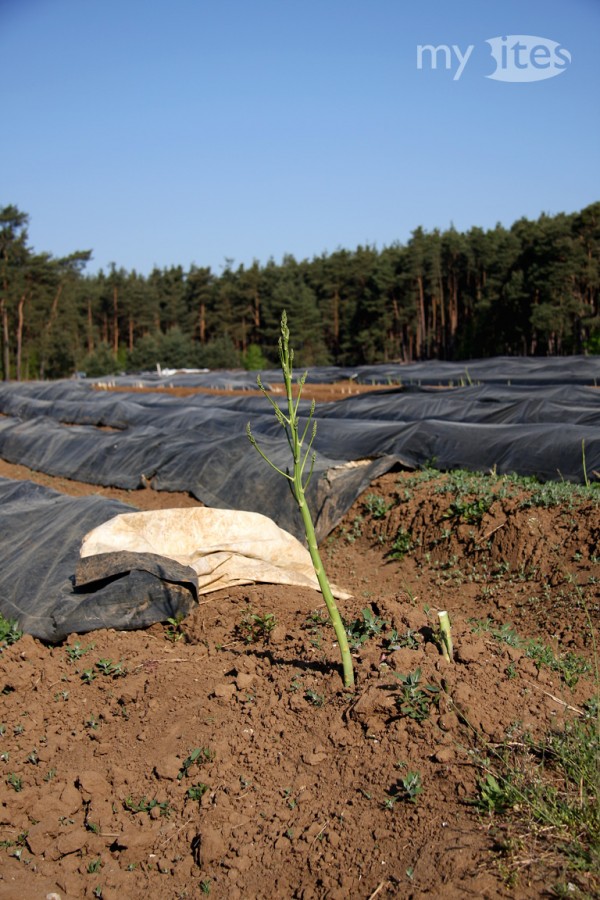 Similarly to grapes or strawberries, there are several different breeds of asparagus, too. Based on the variety, the soil and the region where the asparagus is grown, the taste of white and green sticks can differ substantially. I’ve also learned, that the (sometimes occurring) bitter flavor of asparagus is not related to the thickness at all. Though, whether a picked stick is thick or thin is always a surprise and cannot be influenced.

White asparagus is traditionally served cooked in a sweet-salty broth. Regular accompaniments are new potatoes, sauce Hollandaise and sometimes fish. Asparagus should never be overcooked because it will dissolve into long, extremely chewy strips with a very unpleasant texture. The cooking liquid can be used as a stock for making an asparagus cream soup. In many Franconian restaurants the cooking liquid can be ordered separately as a kind of tea, too. For less traditional preparations, asparagus can be eaten raw, used in salads, grilled, sautéd or caramelized in butter. Due to its sweetness, asparagus is a great ingredient for desserts, too – and pairs especially well with vanilla. 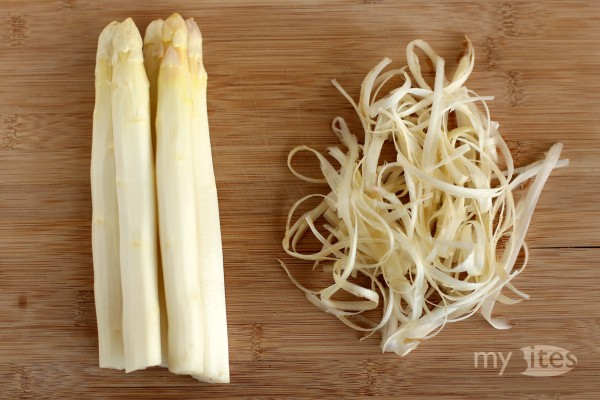