Sour cherries and poppy seeds are a traditional pairing and work really great together. Usually, you can find this combination in the form of crépes, muffins or cakes – so in most cases, they are served as dessert. Since I love to include fruits in savory dishes, I was thinking about a way of using sour cherries and poppy seeds in a more salty environment. Cherry sauce is a classic pairing for duck breasts, so I thought it might work with pigeon breasts as well. Additionally, I enhanced the plate with a few more ingredients that pair similarly well with sour cherries, which took the resulting dish into a very exciting Asian direction. 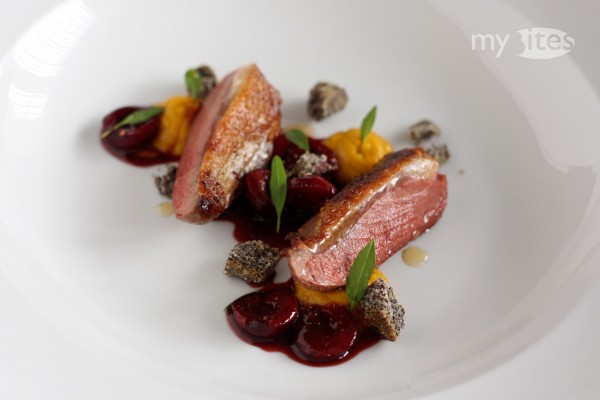 I used sweet potato both due to its sweetness and its Asian connection – since in Beijing coal baked sweet potatoes were sold on almost every corner. Instead of a baked mash, I served the sweet potato as a smooth puree flavored with lemongrass and fresh ginger. For the cherries I used freshly ground coriander seeds and Sichuan pepper, which gave the sauce an incredibly wonderful perfume. A few random drops of toasted sesame oil and some tiny Thai basil leaves gave the final touch and perfected the Asian twist.