Erlangen, the city I live in, is quite unique due to its huge grassland right in the middle of the city. During spring and summer a herd of sheeps is grazing, some parcels are used for wheat or corn production and of course the wonderful grass is regularly collected as animal food for the winter. Every morning on my way to work I ride my bike through this peaceful nature. Right at the outskirts I pass a small lake with giant elderberry bushes. In spring they are almost completely white and full of elderflowers. Now, at the end of summer the bushes turn black from the bending branches of tons of ripe elderberries. Unfortunately most of them are pretty high up and unreachable even with a ladder – but I managed to collect some for a fresh and simple elderberry sauce. 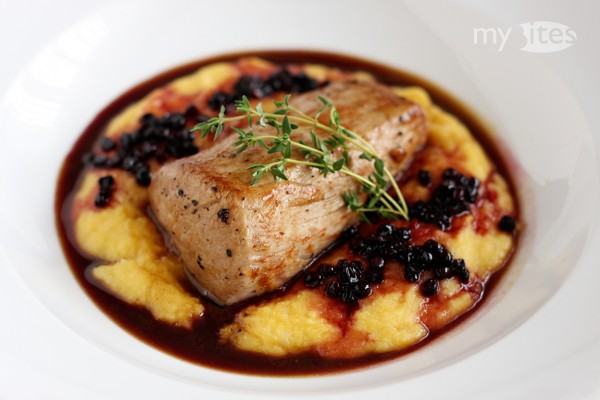 While passing the elderberry bushes, the idea came to my mind that they might pair well with corn. Building further on this idea I remembered a mango polenta I prepared years ago from a cookbook by German celebrity chef Alexander Herrmann. I wanted to stick to seasonal produce, so I switched the mango to peach, which paired perfectly both with the polenta and the elderberries. Originally I planned to grill a duck breast, but my poulterer is currently on holiday so I switched to pork, which pairs very well with fruits and sweet components too. The final result turned out as a simple and wonderful late summer dish created from ingredients only that are in season right now.

2 thoughts on “Pork Fillet with Elderberry Sauce and Peach Polenta”