August and the first weeks of September are the best time for incredibly flavorful local tomatoes. During the season you can find a wide selection of sizes, colors and shapes at the local market, which irresistibly invite you to explore the wide variety. Tomatoes are very versatile: you can broil, roast, grill, stew, fry, dry or simply use them raw e.g. in a salad. One of the most famous and popular salads with tomatoes is probably the Italian Caprese consisting of fresh tomatoes, mozzarella (from buffalo milk), basil, some olive oil and balsamic vinegar. In my version here I integrated the idea of a tomato terrine inspired by a recipe of Tanja Grandits. In her cookbook she called it tomato cassata and used some vanilla too, which I skipped. Instead of red tomato juice I pureed and sieved yellow tomatoes, which added a nice and vibrant color to the final dish. 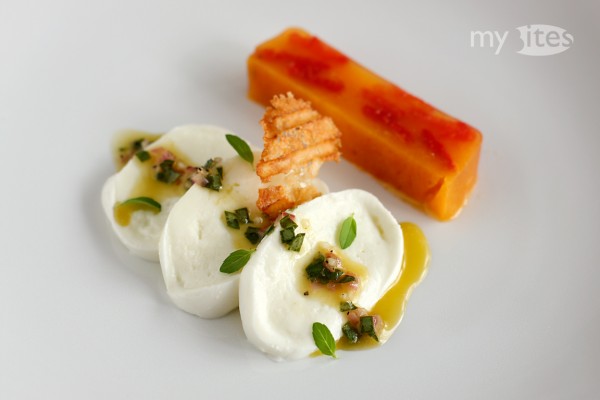 One might also call the tomato terrine on the plate a “slice of umami”. Tomatoes naturally contain a high amount of glutamic acid which is responsible for the savory umami taste. This terrine consists of tomatoes only, boosted by half-drying, some salt and sugar. While the gelled yellow part melts nicely in your mouth, the half dried red tomatoes add a kind of meaty texture. The mozzarella complements it with its chewy, and the mozzarella chip with its crispy nature. The appetizer is finished by some basil-vinaigrette, where the shallots add some spice, the basil some sweetness and the vinegar some freshness. Altogether the different textures and tastes sum up to an extraordinary version of the classic Caprese salad.