Pears, beans and bacon are a traditional German combination. This relationship might also originate from the simple fact, that the seasons of pears and beans overlap. Some additional fat or salty bacon only further improves a dish, so it can’t be a mistake to include it. Traditionally, the combination of these three ingredients is cooked layered in a single pot, but there are countless other ways to prepare and serve them too. In this recipe I combined the beans, pears and bacon in a simple and light soup. Although the soup can be cooked even simpler, I included some further steps to preserve the color and optimize the texture for a perfect green bean soup. 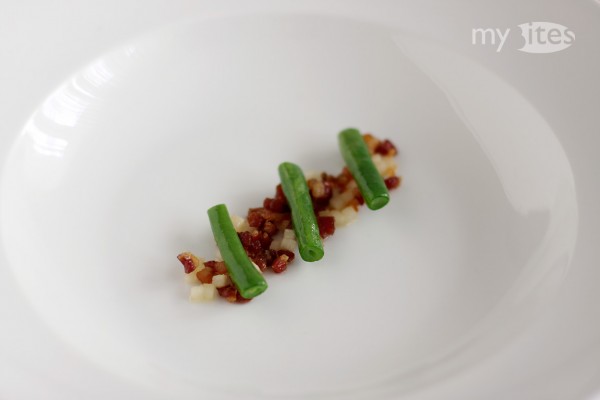 For keeping the soup from turning brown there are two main aspects to which attention should be paid to.  The first is to watch the beans cooking and drain them right away when they turn soft. For stopping the cooking process prepare a bowl with ice water, where you can immediately submerge the cooked green beans after draining them. The second important aspect is pureeing the soup chilled. I like to add some summer savory to the water I cook the beans in, because it boosts the bean flavor. After draining the cooked beans I reserve the cooking liquid and chill it. If I would blend the beans with hot stock, they would get brown pretty fast, so working with chilled beans and chilled cooking liquid keeps the green color and gives me plenty of time. Time, for example, for pressing the pureed soup through a fine sieve. This step is very important for green beans, because they usually have lengthy strings which cause a hairy and unpleasant mouth-feel. 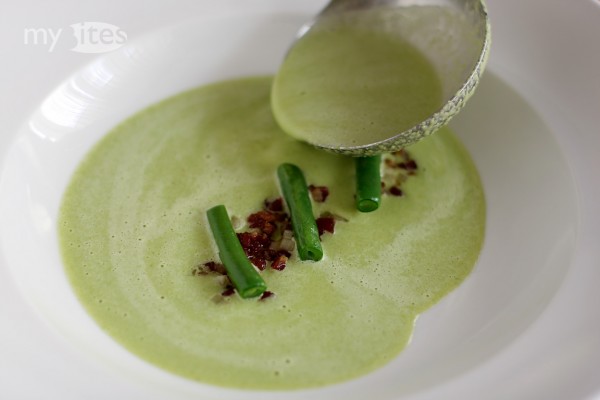 The soup is reheated when needed, so it’s not only a colorful recipe, but also one that can be prepared well ahead. I added the butter and créme fraiche during the reheating and mixed it with a hand-held blender. This way the soup got more foamy, which resulted in a lighter consistency. As something to chew on, I reserved some nice straight pieces of cooked green beans (or you can blanch them separately, see recipe below). The bacon was very slowly cooked and the small pear cubes were only tossed shortly in the rendered bacon fat. The final result allows you or your guests to mix the three main ingredients according to your taste and also to experiment with different proportions, which keeps the soup interesting until the last spoonful.