Similarly to the green bean soup, this dish builds on the traditional combination of the three ingredients: beans, pears and bacon. Due to several modifications, my reinterpretation is pretty far away from the classical way of cooking everything layered in a single pot. Here each component received a unique role on the plate, and I also brought the fourth hidden component, the onions more into the foreground. 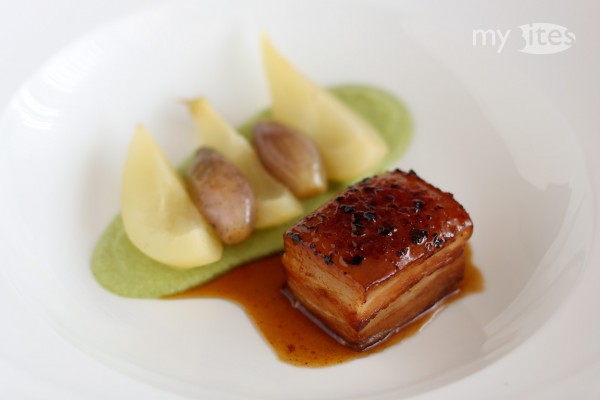 Instead of using bacon, I braised the pork belly for several hours. During this cooking process the belly shrinks significantly and gets very soft, so always use a cake shovel or something similar to lift the belly from its broth. While chilling in the refrigerator, the fat hardens the belly, so when cold the belly can be trimmed to the desired shape. Braised pork belly is usually shortly grilled and often glazed with honey. Based on this, my idea was to use pine tree honey, which added a nice freshness to the sauce. It also worked well with the white wine and star anise poached pears and the silky green bean puree. Next to the pine tree honey and the star anise I used a third hidden component. I braised the shallots as a whole with some vanilla, which pairs really well with the onion flavor.