Some of the most surprising and greatest results emerge from sheer coincidence. It was a similar case for this crispy kale. I planned to use kale with sweet potato marinated Chinese style with soy sauce, garlic, roasted sesame oil, chili and ginger, and baked along with a whole char or trout in the oven. The result was surprising – an effect I originally haven’t intended or planned to achieve. All kale leaves that were standing out from the vegetable bed got wonderful crispy, resulting in a kind of kale chips with Chinese flavor. 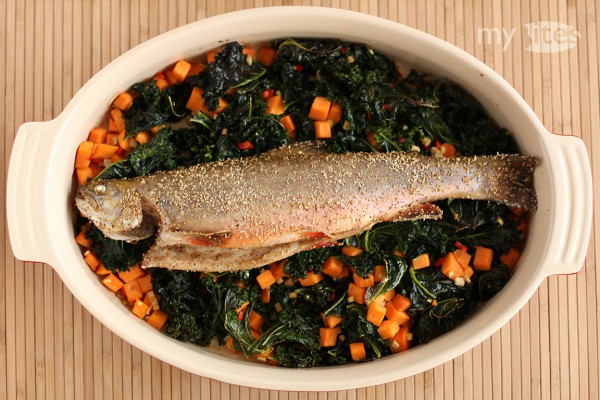 Kale is very similar to other kinds of cabbage or spinach in terms of first requiring a lot of space and while cooking falling together into almost nothing. For kale this reduction in volume is at least not as extreme as for spinach, but it is still a relevant difference. All I wanted to achieve was to speed up the process of kale falling together. So I blanched the leaves shortly in boiling hot water, chilled them in ice water and pressed out almost all of the liquid. I took the leaves apart and marinated them. After baking the leaves turned wonderful crispy, which was a pleasant surprise, but it’s quite straight-forward if you give it a deeper thought. 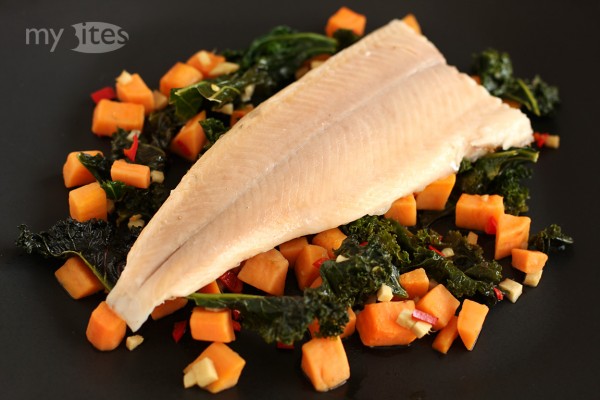 First, through blanching and pressing out the liquid from the kale, actually the water is removed from the leaves, so it didn’t had to dry and it didn’t cook in its own juices in the oven. Second, while marinating the kale it also got coated by some oil, which of course heated up in the oven and simulated a kind of a fryer. And third, the kale leaves got crispy only, if they were free standing, so the hot air could reach them from all sides and they weren’t disturbed by any liquid coming from the marinade at the base, the fish on top or the sweet potato. So actually it’s a kind of low fat oven frying, I just wasn’t aware of it.

2 thoughts on “Char with Asian Style Kale and Sweet Potato”