Nana, a vegetarian friend of mine, announced a vegetarian month, which aims to motivate people to prepare and eat a meatless meal at least once during this month. Besides eating less meat, hopefully the participants will also think a little bit about the vegetarian diet and probably notice that meat does not need to be present on the plate every day. All submitted recipes participate in a contest, where the winner gets an invitation to nana for a vegetarian dinner. Originating from nana’s call for recipes, I took the opportunity to give a thought not only about the vegetarian, but also about the vegan diet.

Reading my blog you might have noticed that I’m not vegan (yet). Although, on weekdays I prepare and eat mostly vegetarian and vegan dishes for dinner – without missing the meat or dairy components. Many people think that a vegan diet must be very limited and dull. I believe, this misconception originates from people imagining the vegan diet as their own minus meat and dairy products. Unfortunately, for most people there is not much left on the plate after such a subtraction. However, the variety of fruits and vegetables is huge and colorful, and with some imagination an endless number of dishes can be prepared with them. While developing new vegan dishes, I believe it is very important not to be guided by the thought of replacing the meat or dairy component. This kind of thinking limits the directions for a new dish enormously and the results will be no good. When I was thinking about elaborate vegan dishes I imagined that meat and dairy never existed, which gave me a large degree of freedom – that is, hopefully, mirrored in my results.

Protein and calcium are two very popular excuses of meat-eaters and milk-drinkers, because since early childhood we have learned that for proteins we need to eat meat and for calcium consume dairy products. Surprisingly, the most calcium of all foodstuffs can be found in poppy seeds. Well, they are unfortunately not quite popular, but e.g. sesame seeds, soybeans, almonds, parsley, hazelnuts, watercress, kale, spinach etc. all contain more calcium as milk. Another surprising fact that many people are not aware of is that legumes and nuts contain the same amount of proteins as meats. So the daily requirements of both calcium and proteins can be covered in a vegan diet. Of course, you need to take care about eating sufficient amounts of different food groups, but you should take similar care even if you eat meat and drink milk. 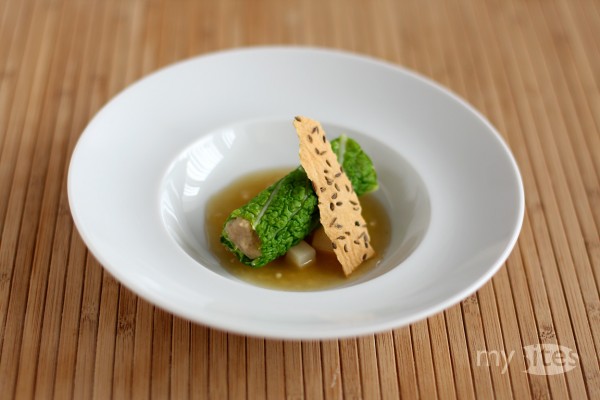 I prepared a four course vegan meal from which this is the amuse gueule or appetizer. Chestnut puree is a traditional Hungarian dessert, but chestnuts work great in savory dishes too. One of the best savory pairings for chestnuts are cabbages like Brussels sprouts or this savoy cabbage. To avoid using milk, I prepared the chestnut puree from scratch and added some sour apple and fresh ginger. Afterwards, I wrapped the puree in a blanched savoy cabbage leaf. Because the cabbage cannelloni can’t be cut in pieces with a spoon, you should either serve the appetizer with knife and fork or cut the roll in 3-4 pieces while plating the dish. I used the remaining parts of the cabbage for a very intense broth, which I flavored with vinegar to contrast the slightly sweet chestnut puree. For thickening the sauce I used a technique from the cookbook Pure Nature by Nils Henkel. The tapioca pearls not only thickened the sauce, but also added a nice jelly-like consistency. On this cabbage sauce I plated some sunchoke (Jerusalem artichoke) cubes and added the cannelloni on top. For a crispy texture and a kind of spicy flavor I finished the plate with a caraway and dill seed cracker.