I’ve been longing for a fruit and vegetable juicer, but never had any free space in my flat to store it. Now that I gave up my tv – which I haven’t turned on since last Easter – I bought a quite powerful juicer in its place. For the inauguration I juiced some kale leaves which I used in a previous recipe for a puree. The extracted liquid was pretty clear and the remaining shredded leaves were dry, so I was happy. Cleaning the parts is a little bit labor intensive, but it is still worth for the result. On my second attempt I extracted the juices of a red cabbage, which I used for a dark purple colored creamy soup. 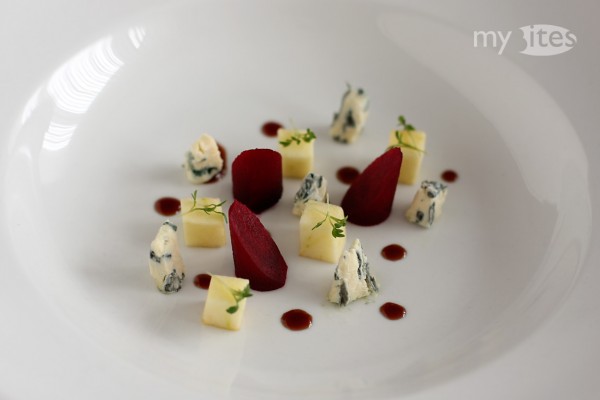 I could have used thickeners to get a creamy consistency, but I rather cooked some spoonfuls of the shredded cabbage in the extracted juice until they were very soft. Every time I wanted to stir the soup I used a handheld blender instead of a spoon. This accelerated the softening process too and somehow resembled the functionality of a Thermomix, which actually cooks and blends the ingredients simultaneously. The final result was a smooth and creamy soup.

I seasoned the soup with classic accompaniments of red cabbage, such as apples, red onions, dry red wine and vinegar. You might add some winter spices as well, such as cinnamon or cloves. I garnished the soup with baked sweet red beets, tart apple cubes, aromatic blue cheese and spicy cress. The few drops of balsamic vinegar on the plate – I used one that is flavored with blackberries – aren’t decoration only, but dissolve in the soup irregularly and keep the soup interesting until the last spoonful. You can prepare the soup as a vegan version too by skipping the blue cheese. 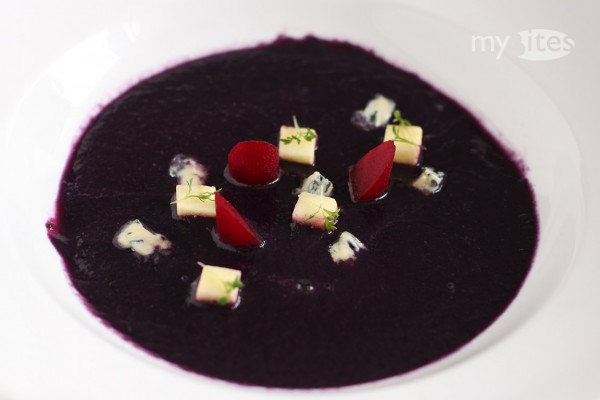