Cauliflower is a vegetable that can be stored quite well, and therefore it is available throughout almost the whole year. Actually, the real season for cauliflower – at least in Europe – is about right now. During spring and summer fresh cauliflower can be sourced from local farmers in white, green, orange or purple colors. Usually, cauliflower is picked into florets and cooked or steamed tender, or it is sometimes prepared as a creamy soup. In this recipe I cooked the cauliflower slightly different than usual and served it with a crispy roasted trout fillet. 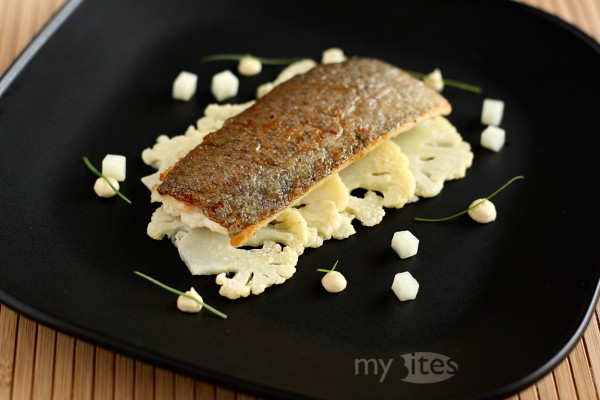 My main problem with cauliflower florets is, that they come in various sizes and therefore require different cooking times for an optimal result, which should be neither mushy nor raw. To overcome this problem I used larger florets than usual and cut them into slices using a mandoline. Then I blanched the cauliflower slices in boiling salted water, chilled them in ice water and reheated them right before serving the dish in some butter. This way I managed to cook each cauliflower slice to its own perfectness.

I also used the stems of the cauliflower. Its taste always reminds me of kohlrabi. Next to the stem dices I added drops of a home-made lemon and poppy seed paste. For the paste I blanched a lemon several times to remove it’s bitterness and pureed it with freshly ground white poppy seeds. In contrast to traditional black poppy seeds, I was surprised by the very sticky nature of the ground white poppy seeds. For example cleaning my grinder afterwards was not an easy task. The lemon and white poppy seed paste had a very nice nutty flavor, which paired perfectly with the cauliflower and added freshness to the dish due to its decent sour taste. 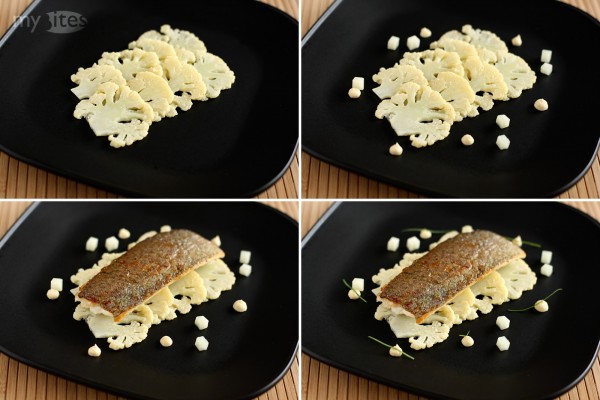