Baking in salt-crust is a technique usually applied to fish, meat, potatoes, beets and sometimes celery roots. In fact, a lot more vegetables can be covered in coarse sea salt and baked in the oven, where the salt-crust not only seasons the vegetable, but also keeps all the flavors inside. This time I experimented with salt-baked kohlrabi, which developed into a magnificent result. 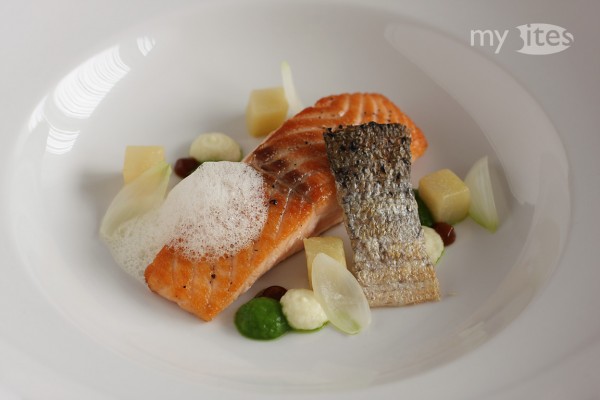 During the baking process, the kohlrabi shrank and turned yellowish, while its flavor intensified and its texture became smooth and kind of creamy. After removing the salt-crust, the kohlrabi was very easy to peel, although I’d advise not to peel off too much, because the best parts are those just beneath the skin.

Next to the baked kohlrabi I prepared two different kohlrabi purees. For the green puree I used all the skins, stalks and leaves, cooked and blanched them respectively, drained them thoroughly and blended them with some walnut oil into a smooth puree. For the white puree I grated a peeled kohlrabi and cooked it in its own liquid with only a little amount of additional water. This way I was able to intensify the flavor of the kohlrabi puree. As crispy elements I used an idea seen in Nils Henkel‘s cookbook. I briefly blanched some onion wedges and warmed them before plating in some butter. As a slightly spicy component I mixed peanut butter with malt extract and seasoned it with soy sauce. This Asian-flavored peanut paste worked great both with the kohlrabi as well as with the roasted salmon. I even used the cooking liquids from both kohlrabi purees, which I infused with juniper berries and gin, strained, and mixed with lecithin into an airy foam. Finally, I garnished the plate with the crispy skin of the salmon.

4 thoughts on “Salmon and Kohlrabi”