Pumpkins and squashes are extremely versatile. In Hungarian language the butternut squash is called “baking squash” (sütőtök), because traditionally it is simply cut in slices and baked in the oven until nicely caramelized. The name is somehow misleading, because pumpkins and squashes can be also cooked, steamed, or even be eaten raw or marinated. By adding sugar or syrup they work really well in cakes or sweets too. Based on this sweet application I created a mini cake inspired by Dominosteine, a praline of German origin. 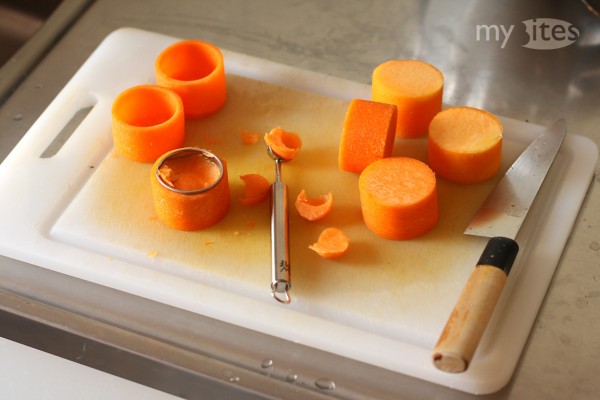 I created this recipe for a Hungarian food blogger contest which is held this month by a friend of mine living in Budapest. Because Zizi is writing a vegetarian blog, the topic was to create vegetarian dishes with pumpkin or squash as main ingredient.

Dominosteine typically consist of three layers: marzipan, followed by apricot jelly and a gingerbread (Lebkuchen) base. Covered with milk or dark chocolate they are a cheap, but very delicious version of a praline. In this recipe I made the jelly from maple syrup, switched the marzipan to cranberries and the gingerbread to chestnut biscuit. The lemongrass and ginger flavored candied pumpkin hull was an additional fourth layer added to the traditional three layers of Dominosteine. 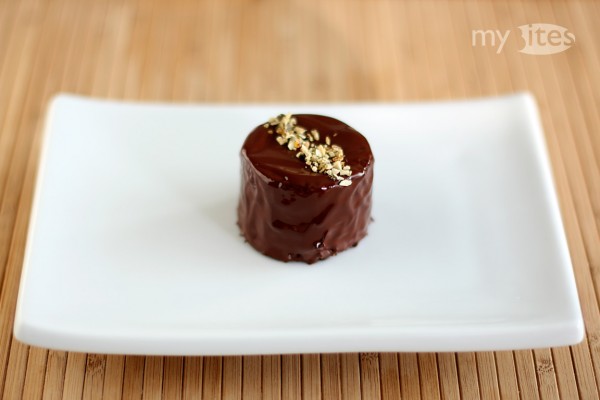 As a last step I covered the pumpkin candy with dark chocolate which also solidified the pumpkin. Along with this chocolate coating it resembled the Dominostein really well (although I made round versions instead of cubes due to limitations of my cookie cutter collection). It tastes great with the chocolate, but the flavors are much more delicate without the coating. Some mini cakes I gave as a small present to a colleague of mine who held his birthday party on Saturday. Everyone preferred the chocolate version. So at the end I leave it up to you whether you add the chocolate coating or not. But I would recommend to halve the cakes before serving them. The pumpkin layer is still solid in the final dessert, so you cannot get through it easily with a fork – the whole cake will just collapse due to the soft components inside. When the cake is halved, you can easily slice it with a fork from the side. 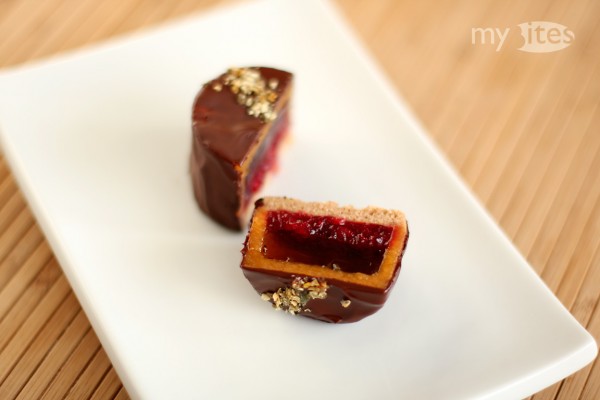 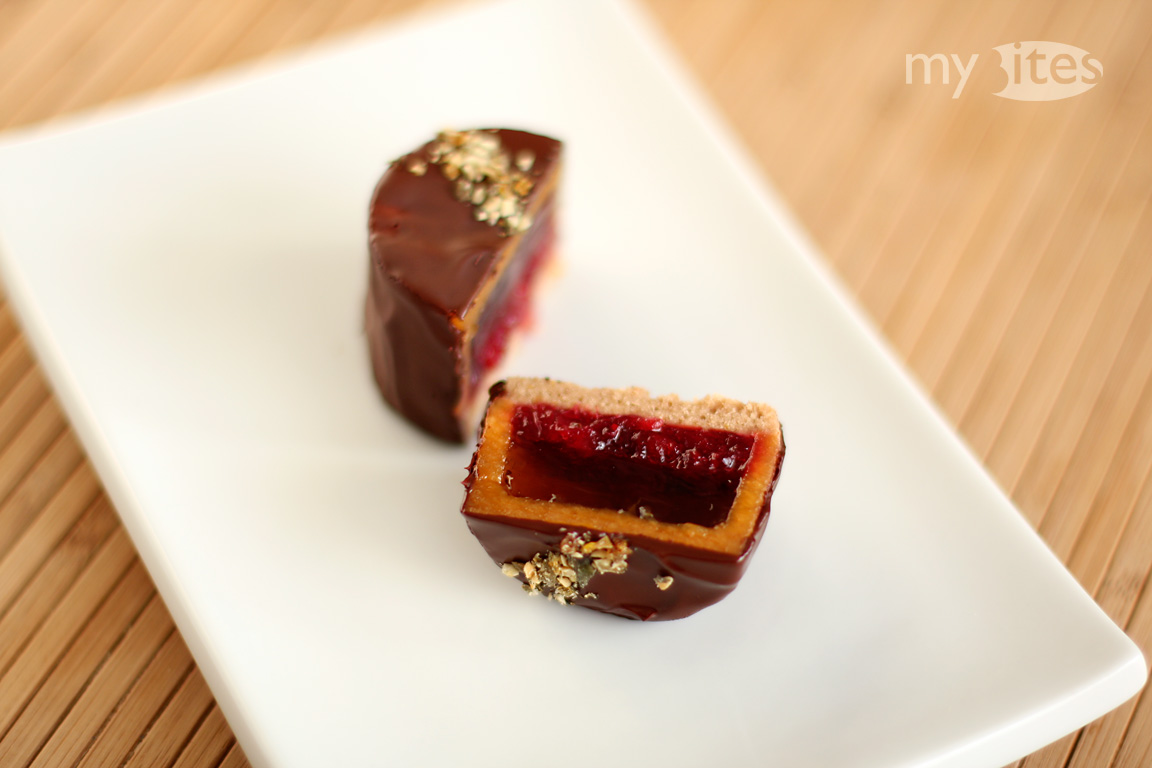 For the syrup
Finely chop the lemongrass and add to a small pot with 1 piece of orange and lemon zest, 1cm fresh ginger, 100g sugar and 200ml water. Gently bring to a boil and keep simmering.
For the pumpkin hull
If using a butternut squash, only the upper part will be needed. Peel the squash or pumpkin and discard the seeds. Using an appropriate cookie cutter cut out cylinders of 5cm diameter. Cut the cylinders to a height of 3cm and press in a cookie cutter of 4cm diameter (leaving 0,5cm thin border of pumpkin). With the cookie cutter still in the pumpkin scoop out the flesh. Be aware when scooping out the bottom not to break through the thin pumpkin layer. Remove the cookie cutter and place the hollow pumpkin cylinders into the syrup. Scoop in the hot syrup in the interior of the cylinders and gently cook the pumpkin for 10 minutes. Remove from the heat and allow the pumpkin to cool completely in the syrup. Remove the pumpkins very carefully(!) from the syrup, drain on paper towels and remove any remainders of zest or lemongrass. Wrap a small board in clingfilm and place the candied pumpkins on it with their flat side down. Refrigerate.
For the maple syrup jelly
Mix the maple syrup with 15ml water and warm at low heat. Soak the gelatine leaf in cold water for 5 minutes, squeeze out the water and dissolve the gelatine in the warm syrup. Remove from the heat and allow to cool down to room temperature. Fill the syrup into the hollow pumpkins until they are half full. Refrigerate until the maple syrup gelled.
For the cranberries
Wash the cranberries and add to a small pot along with 50g sugar and 25ml water. Cover and gently bring to a boil (the berries will start to pop). Reduce the heat to a minimum, stir once and cook until the cranberries start to thicken (when cold it will thicken even more due to its pectin content). Cool down to room temperature and add to the pumpkins until they are full. Pay attention not to leave any gaps. Refrigerate.
For the chestnut biscuit
Preheat the oven to 200°C / 390 F. Separate the egg. Beat the egg whites with a pinch of salt until very stiff. In a separate bowl beat the egg yolk with 25g sugar until foamy. 1tsp grated orange zest, 2tbsp milk, 2tbsp neutral oil, a pinch of cinnamon, anise and freshly grated nutmeg and mix well. Sift the chestnut flour, add to the egg yolk and mix well. Gently fold in the beaten egg white until a homogeneous dough forms. Line a baking tray with parchment and transfer the dough on it. Don't spread the dough, allow it to unfold on its own. Bake in the hot oven for 10-12 minutes. Remove from the oven and chill to room temperature. Using a cookie cutter cut out circles of 5cm diameter. Place the circles on the pumpkins (it will stick to the cranberries) and put the pumpkins into the freezer.
For the candied pumpkin seeds
Roast the pumpkin seeds in a clean pan until they start to pop. Remove the seeds and caramelize 1tbsp sugar in the hot pan. When the sugar turns brown, add the pumpkin seeds, stir once and transfer everything from the pan on parchment paper. Allow to cool completely, then break it up in a blender.
For the chocolate coating
Place a bowl on a pot filled with 1-2cm water. Add the chocolate to the bowl and slowly melt the chocolate over low heat. Carefully turn around the pumpkin desserts and coat them with chocolate. Allow them to cool on a cake screen and sprinkle with candied pumpkin seeds.
To serve
Before serving, cut the mini cakes in half using a sharp bread knife.
3.1
http://mybites.de/2011/11/pumpkin-dominostein/