Have you ever wondered why fish in Germany – and almost everywhere in Europe – is gutted with a cut at its belly? It’s straightforward to some extent, because all innards are located in the belly, and by removing them along with the gills, the fish can be kept refrigerated 3-4 days longer. In China I noticed that fish are usually kept alive in restaurants and killed to order. An even more interesting experience was to see that all fish was cut open and gutted from its back, so the bellies of the fish were always completely intact. I liked this back filleting method simply because the possibilities of stuffing and serving a whole fish. Unfortunately, at the local market in Erlangen they don’t sell any fish alive and all of them are already gutted via a cut along their bellies. So my filleting from the back basically resulted in two fillets held together by the head and the tail of the fish, but made the seasoning of the whole fish a lot simpler and more precise. 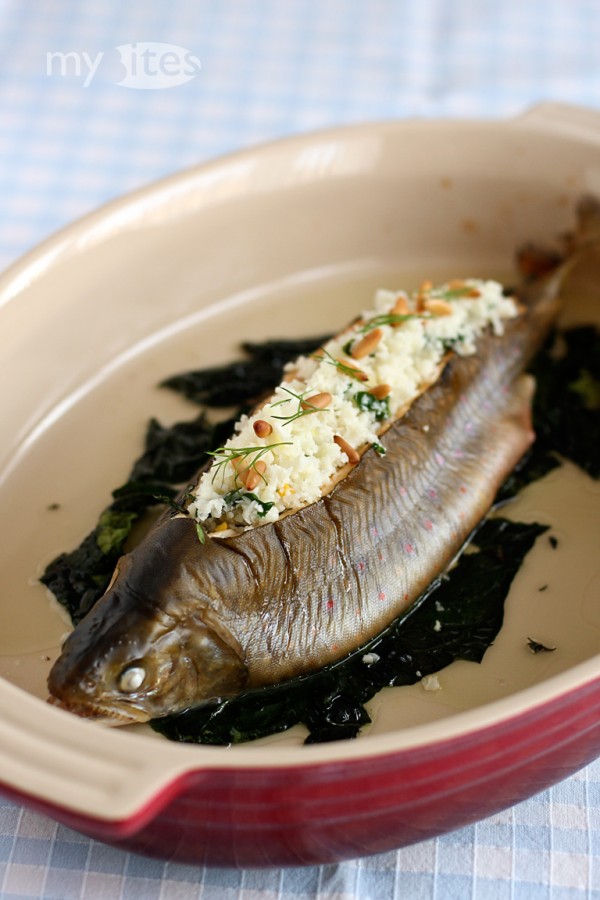 I stuffed the fish with fresh tarragon and thyme, but you can use almost any other herb as well. Because the meat on the fillets of the fish were completely open and accessible, they absorbed the salt, pepper and the flavor of the herbs much better. 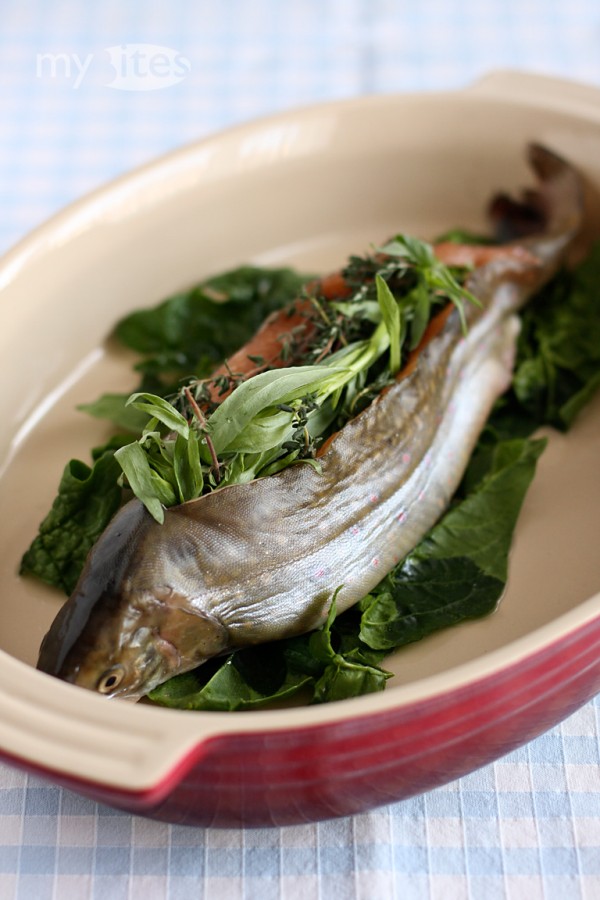 As garnish I cooked a cauliflower couscous. The original idea of preparing a couscous from the crumbly surface layer of cauliflowers came from the ingenious Ferran Adrià and his team at el Bulli. Actually he used a microplane to rub off the crumbly bits of a cauliflower’s surface. Because the yield is very limited and I wanted to use the remaining parts of the cauliflower as well, I decided to pick the cauliflower into small florets and chop them with 4-5 short pulses using a blender into a couscous-like texture. This method didn’t result in uniform crumbs, but it’s a very fast and simple way to get close to a couscous-like consistency. Enhanced by additional vegetables, this cauliflower couscous can be prepared as a fast and simple vegan or vegetarian supper as well. 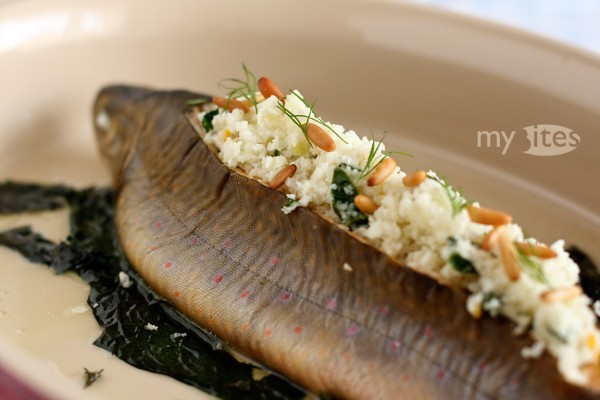 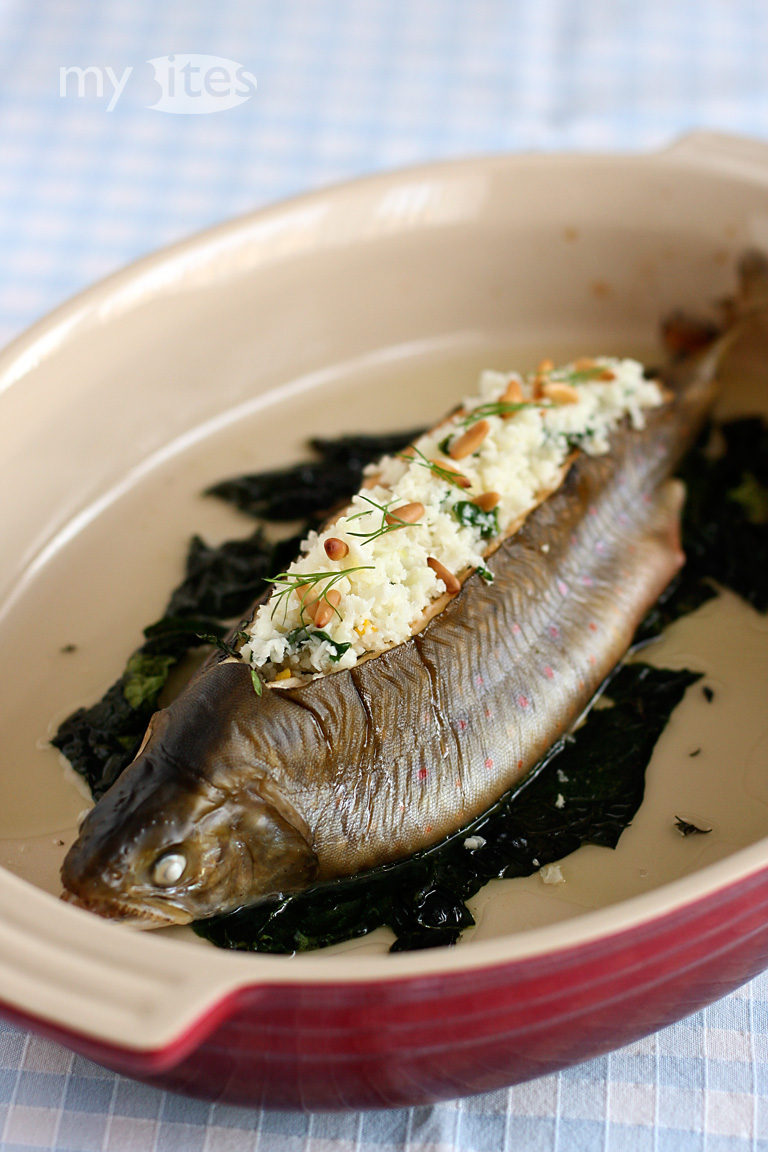 For the spinach
Wash the spinach until the water comes down clear. Shake dry and remove the stalks from the leaves. Chop half of the spinach.
For the pine nut
Roast the pine nut in a 200°C / 390 F hot oven on a grid covered with parchment paper until golden brown. Remove from the oven and reserve.
For the fish
Place a large enough dish into the oven and preheat to 200°C / 390 F. The fish should have room temperature when you start with the preparation.
Wash the fish in cold water and tap dry with kitchen paper. Using a sharp knife remove the spine carefully while keeping the head and the tail untouched so the fillets will not fall off. Open the fish and remove the bones using a tweezer. Season the inside of the fish with salt and pepper. Fold the fillets together and fill the fish with a mix of tarragon and thyme.
Remove the hot dish from the oven and add 1-2 tbsp oil to it. Add a layer of spinach leaves to prevent the fish sticking to the dish. Add the fish on top and bake for 20-22 minutes.
For the cauliflower couscous
Wash the cauliflower, discard the leaves and pick into florets. Add the florets to a blender and with 4-5 pulses cut them into a consistency similar to couscous.
Finely chop the shallot and the garlic. Heat a large pan, add 1 tbsp coconut oil and sauté the shallot and garlic. Add the cauliflower and about 300ml water, vegetable or fish stock. Cook over medium heat stirring occasionally for 8-10 minutes until the cauliflower is soft but not mushy. Within this time the liquid should evaporate almost completely.
Peel the ginger. Discard the seeds from the kumquats and cut with the ginger into very small pieces. Add the kumquat, ginger and chopped spinach to the cauliflower. Season with salt, pepper, chili oil and freshly squeezed lime juice or some vinegar.
To serve
Remove the herbs from the chars and fill the fish with cauliflower couscous. Decorate with pine nuts and dill.
3.1
http://mybites.de/2012/02/char-with-cauliflower-couscous/