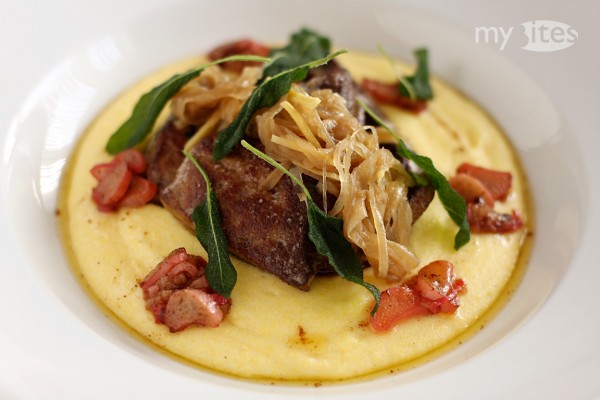 When reading restaurant menus or cookbooks, roasted liver can be found paired usually with dry wines or (balsamic) vinegars. In this recipe I replaced the vinegar by rhubarb, which I briefly sautéd in the same pan I used for roasting the calf’s liver. I served both the liver and the rhubarb on top of creamy polenta. Onions are a classic pairing of liver too, so I garnished the liver with home-made onion marmalade enhanced by some ginger. You can either add the ginger right to the onion when cooking the marmalade, or also add the ginger later on when warming 2 spoonful of the marmalade for the dish. As a final touch, I sprinkled the plate with fried sage leaves, which had the role of a crispy element. In the end, the plate turned out as a classic bistro dish, with a small and refreshing twist by the addition of the rhubarb. 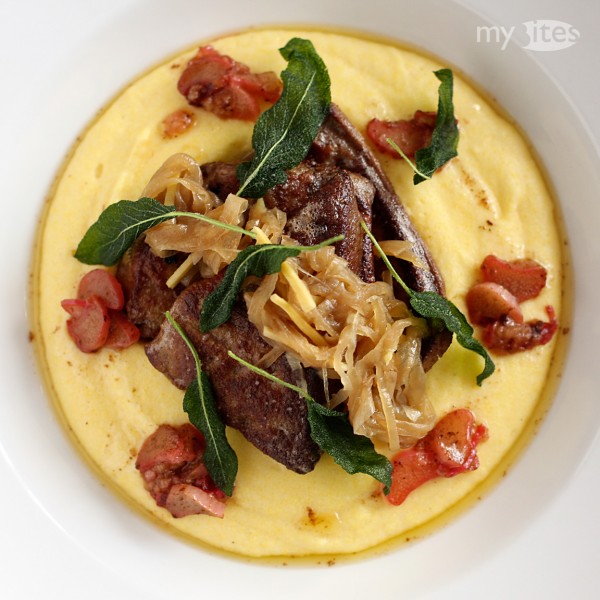 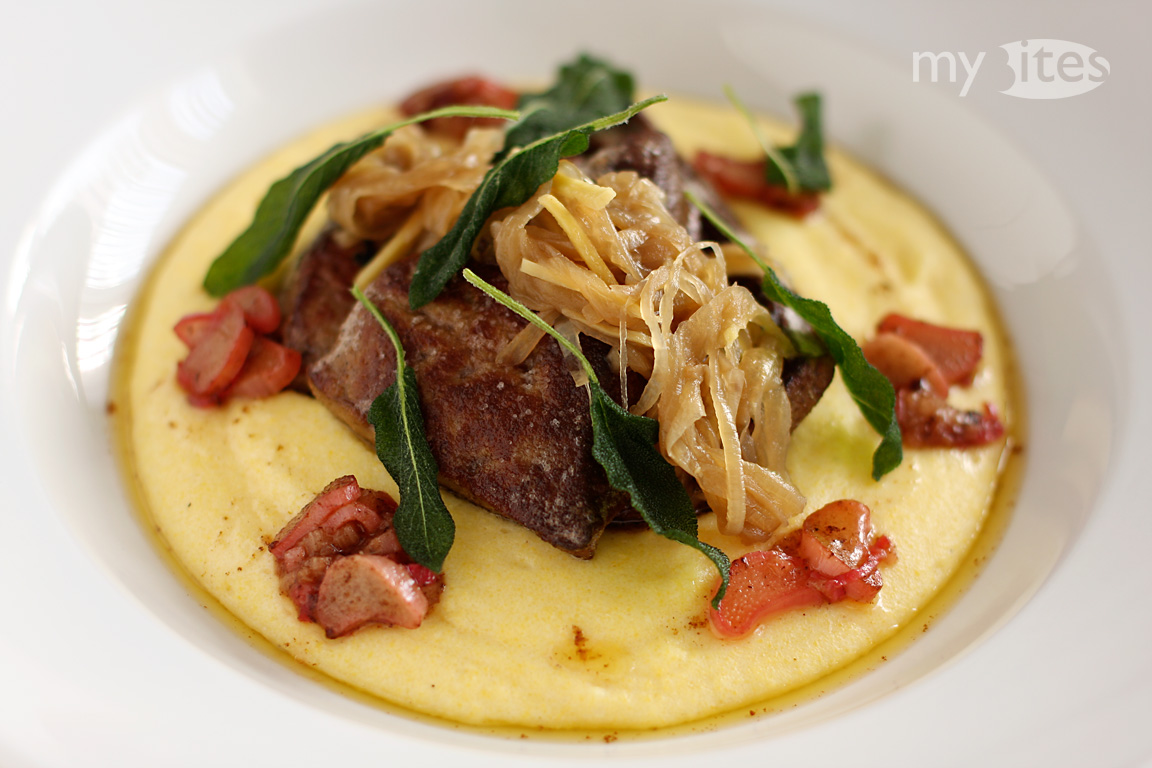 For the ginger-onion marmalade
Peel the onion and ginger and cut into thin strips. Add to a large pot with 2-3 tbsp water and a pinch of salt. Cover and cook over low heat until soft. Remove the lid and cook for 4-5 hours until the onion gets pale brown. Stir regularly to avoid burnt spots. If there's no liquid left under the onion, add some white wine (at total about 100ml) and water. Season the ginger-onion marmalade with salt and sugar. Chill to room temperature and refrigerate.
For the crispy sage
Wash the sage and shake dry. Pick the leaves and drain on kitchen paper. Fry in hot oil until the liquid from the leaves has been removed and drain on kitchen paper. Reserve.
For the polenta
Bring 250 ml water, 250 ml milk, 50 ml dry white wine, 1 crushed garlic clove, thyme sprigs and a large pinch of salt to a boil. Discard the garlic and the thyme and add the polenta while stirring constantly. Cook over low heat for a few minutes. If the polenta is still too thick, add some milk. Add 1 tbsp butter and the grated parmesan to the polenta. Season with salt and keep warm.
For the liver
Cut the liver into 1 cm thick slices and drain on kitchen paper. Flip the liver slices in flour and roast in a pan with 1 tbsp foaming butter on both sides. Season with salt and pepper. After the liver has gained a nice color and crust, transfer the slices to warm plates and leave in a warm place (e.g. a 60°C / 140 F hot oven) for a few minutes.
For the rhubarb
Wash the rhubarb and cut into slices. Add the rhubarb shortly (for a few seconds only) to the pan where the liver was roasted in. Season with a pinch sugar and remove from the heat.
To serve
Warm 2-3 tbsp onion marmalade.
Add 1.5 ladles polenta in warm plates and add liver slices on top. Garnish with onion marmalade, rhubarb and crispy sage.
3.1
http://mybites.de/2012/05/calfs-liver-with-ginger-onion-marmalade/