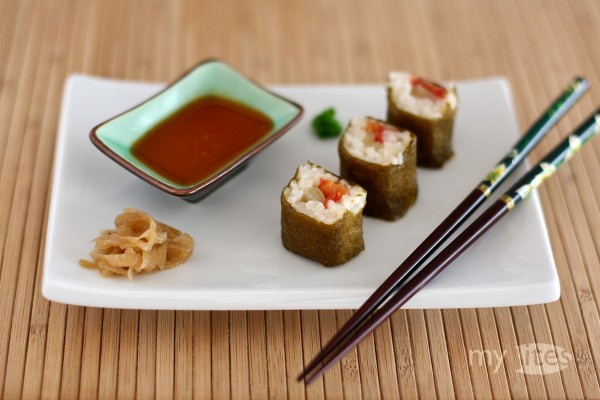 Sushi is always wrapped in nori sheets made from pressed and dried algae. But why don’t those sheets fall apart into single algae leaves? I suppose the secret lies in the high agar content of the algae. Agar is used for gelification and also helps to hold thin sheets together. Thinking about fruits and vegetables, they naturally contain a similar gelling agent. Thanks to the pectin content, jams made from fruits form a gel. Paté de fruits or fruit leathers are also bound together by the pectin. My idea was to adapt the technique for fruit leathers to vegetables – in this dish for green tomatoes and bell peppers, which also contain some pectin – and create thin sheets for wrapping sushi in them. The result was marvelous. The dried thin vegetable sheet resembled all features of the classic nori sheets, but with a different flavor. Just imagine the endless number of combinations and new possibilities for sushi-wraps!

Another idea I used for the lechosushi were the texture of tomatoes and bell peppers. Half-dried tomatoes develop a similar consistency to soft meat and can be used perfectly for vegan tartars, which actually fool a lot of meat-eaters. Baked bell pepper not only develops a rich flavor, but also gets a slightly meaty texture. Both combined yield the flavor profile of a lecsó. So in the end it was self-evident to use half-dried tomatoes and baked peppers as the filling for the newly developed lechosushi.

Above I mentioned, that I prefer my lecsó with rice. Since rice is a main ingredient for sushi, it was straightforward to use it in the lechosushi as well. I used less rice vinegar for the rice compared to traditional sushi recipes, because I didn’t have to balance the fattiness of the fish. Instead I replaced some of the vinegar by a reduced lecsó stock, which I cooked from all the leftovers from the half-dried tomatoes and peppers (such as skins, seeds and pulps). I also tried to substitute the traditional accompaniments of sushi by replacing the wasabi with a hot green pepper paste and by changing the ginger to onion marmalade. For the soy sauce I experimented with a deep brown onion sauce, but dropped it in the end, because it took the sushi into a different direction. Instead, I cooked a lecsó soup and reduced it to a slightly thick sauce, which enhanced the lecsó flavor even more.

If you would like to taste this quite original and unique appetizer, come to Budapest on the 8th of September this year. The Hungarian Dining Guide invited me to their annual Blogger Tasting, where I’ll be serving these lechosushi along with Noémi from Almond Corner, who will prepare a classic Hungarian dessert in a different and new form. We’ll be behind the counter from 3 to 6pm on the 8th of September. The tasting will be held in conjunction with a 3-day-long street food show at the marketplace in the Hold street (Budapest, Hungary), where you can taste a lot of different specialties as well. So if you will be around, I’d be happy to see and meet you there! 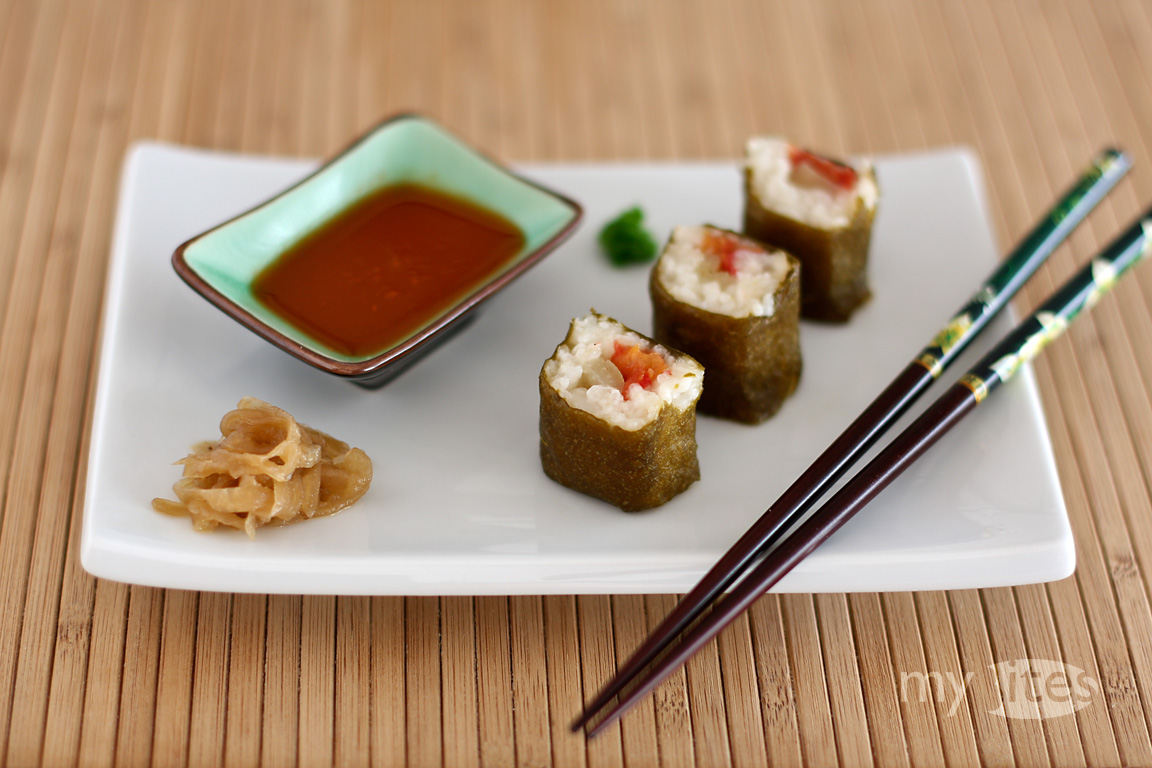