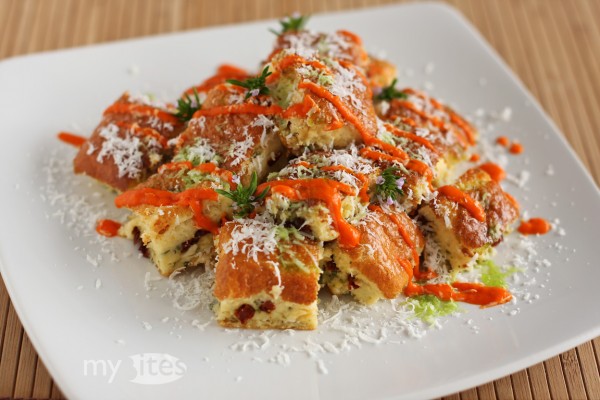 Although the texture of the resulting Schmarrn was fluffy, it wasn’t as airy as in the sweet variations. I believe this behavior can be explained by the amount of cheese (and its fat content) in the dough, which obviously slightly inhibited the dough to rise. The taste of the goat cheese Kaiserschmarrn was sublime and especially enhanced by the bell pepper sauce, the tomato “raisins” and the tarragon oil.

For the tarragon oil
Wash the tarragon and pick the leaves from the stems. Discard the stems. Shortly blanch the tarragon leaves in boiling hot water, then chill immediately in ice-water. Drain and squeeze the liquid thoroughly from the leaves. Coarsely chop the blanched tarragon and weigh. Add the double weight of neutral oil and blend well. Leave for 4-8 hours in the fridge, then sift through a coffee filter. The resulting clear green oil keeps for 5-7 days refrigerated or several month in the freezer.
For the bell pepper sauce (coulis)
Wash the bell peppers, cut in 3 pieces and discard the seeds. Line a baking tray with parchment paper and add the bell peppers with their skin side up. Bake in the oven at the highest setting at the top level until the skins pop and turn black. Remove the bell pepper from the oven, transfer to a small pot and cover. Chill to room temperature. Remove the skins and chop the bell pepper. Blend the bell pepper with about 50ml mild olive oil into a smooth puree. Season with salt, pepper and a few drops of vinegar. Cover and refrigerate.
For the tomato "raisins"
Cut the dried tomatoes into cubes and transfer to a bowl. Add enough gin to cover the tomato completely. Soak for 2 hours, then drain and reserve the liquid. Mix the tomatoes with some flour and sift to remove the remaining flour.
For the Kaiserschmarrn
Mix the flour and the goat kefir. Separate the eggs. Add the yolks to the kefir-flour mixture and stir together with the finely chopped rosemary, sage and thyme, 100g fresh goat cheese, 50g finely grated aged goat cheese and 2-3 tbsp of the reserved gin. Season with salt and freshly ground black pepper.
In a separate bowl beat the egg whites with a pinch of salt until peaks start to form. Add the egg whites in batches to the batter. Stir gently to keep as much air bubbles as possible.
Melt 1 tbsp butter in a large pan and add the batter. Sprinkle with the floured dried tomatoes and cover with some batter. Brown the bottom of the batter, then place in the oven at the top level. Bake at 200-250°C / 390-480 F until the top is nicely browned. If you have a pan with a plastic grip, wrap it in aluminium foil to protect it from the heat.
To serve
When the top of the Kaiserschmarrn has browned nicely, remove it from the oven. Take the dough apart into bite-size pieces with two forks or a flat kitchen tool.
Place the Kaiserschmarrn on warm plates and grate some aged goat cheese over it. Pour some bell pepper sauce over the Kaiserschmarrn and sprinkle with tarragon oil.
3.1
http://mybites.de/2012/10/goat-cheese-kaiserschmarrn-with-bell-pepper-sauce/