Steak tartare appears quite often on menus in Hungarian restaurants. Usually the beef loin is matured covered in oil and some spices and herbs. This is a necessary step – unfortunately meat is not allowed to be aged long enough because of regulations of the health department. The beef is then minced using a grinder to order and usually served already mixed with spices, onions, garlic, an egg yolk and toast. This is the classic version you get in Hungary, but nowadays more elaborate tartares start to show up. Recently, I had a steak tartare at the Winekitchen, where the beef was finely chopped to order (by hand!) and served with fresh warm bread and mayonnaise made of pumpkin seed oil. It inspired me to create my own summer version of steak tartare. 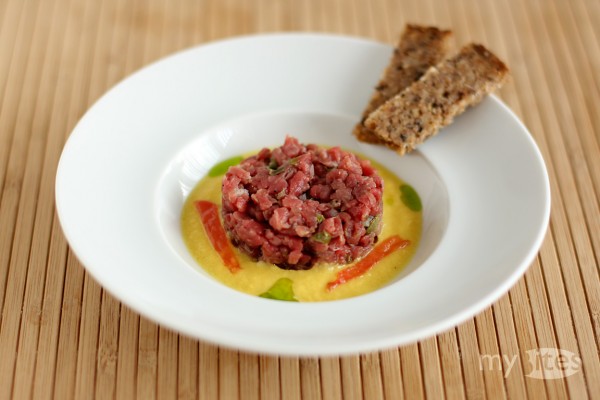 Cutting beef loin to very small cubes by hand preserves the wonderful texture of the beef tenderloin much better than grinding. Here in Germany I was able to use a well-aged slice of beef, so I could skip the oil-maturing. The tartare itself has only minimal seasoning by some shallots, capers, salt, pepper and mild olive oil. It is essential to freshly grind the pepper, because it adds a subtle flowery and fresh note to the dish. I placed the tartare on small plates and garnished it with bell pepper coulis, which has a similar texture to mayonnaise. Although, I served the dish cold, as an appetizer it is always advisable to add a vibrant component to tickle the palate. The small tomatoes preserved in vinegar at Food in Jars inspired me to treat tomatoes as fruits and preserve them the same way as mustard fruits. Mustard fruits have a unique balance between sweet, sour and slightly pungent flavors, which was just what I was looking for to complete this dish. I used only the flesh of the tomatoes and discarded the pulp. The appetizer was finished with a few drops of dill oil, which made every bite taste a little bit different and kept the dish interesting till the end. 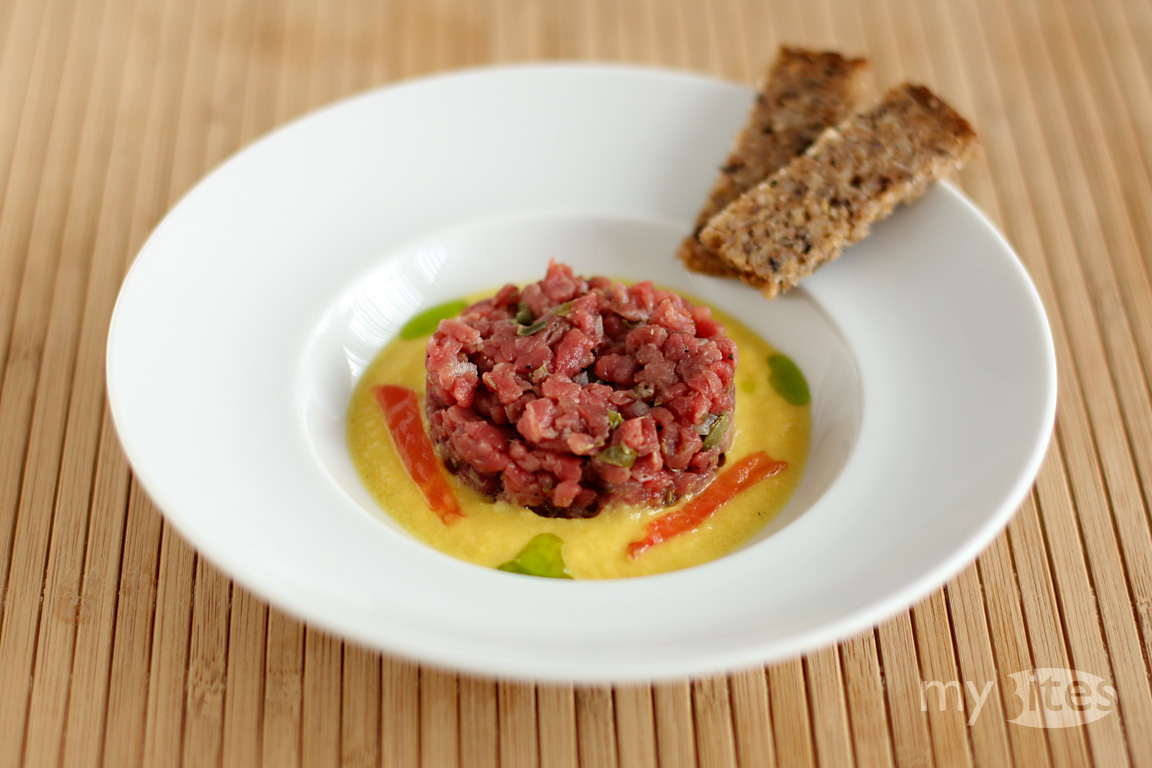 For the mustard tomatoes
Wash, blanch and peel the tomatoes. Place the tomatoes in a small jar and leave for 15 minutes in a 100°C / 210 F hot oven. Meanwhile mix together the white wine vinegar and the sugar and heat to a boil. Let it cool down a little bit, then using a whisk stir in the mustard powder. Remove the jar from the oven, add the mustard seeds, bay leaf and juniper berries and cover the tomatoes with the warm vinegar. Cover the jar with its lid, let it cool to room temperature and refrigerate. Shake gently twice a day and it will keep at least for a week.
For the dill oil
Wash the dill. Holding the thick end of the bunch shortly blanch the dill in boiling hot water, then chill immediately in ice-water. Drain and cut off the thick ends you were holding. Coarsely chop the blanched dill and weigh. Add the double weight neutral oil and blend well. Leave for 3-4 hours in the fridge, then drain through a coffee filter. The resulting clear green oil keeps for 5-7 days refrigerated or several month in the freezer.
For the bell pepper coulis
Wash the bell pepper, quarter and discard the seeds. Cover a baking sheet with parchment paper and lay the bell pepper on it with its skin side up. Grill in a 250°C / 480 F hot oven until the skin turns black. Remove the bell pepper and immediately transfer to a heatproof container. Cover with clingfilm and leave to chill to room temperature. Peel the bell pepper and discard black and brown parts. Blend the flesh with 1/2 tsp apricot vinegar and 1 tbsp mild olive oil. Season with salt, cover and refrigerate.
For the tartare
Cut off any sinews from the tenderloin. Using a very sharp knife cut thin slices, then thin stripes and finally very fine dices from the tenderloin. Dice the shallot and the capers very finely and mix with the tartare. Season with salt, freshly ground black pepper and 2 tbsp mild olive oil. Don't keep it longer than 2-3 hours in the fridge and make sure that the tartare has room temperature when served.
To assemble
Take two small plates and place a dessert ring in both. Split the tartare between the two rings and level it with the back of a spoon. Add 5-6 tsp bell pepper sauce around the ring. Remove 1 tomato from the vinegar, discard the pulp and cut the flesh in thin stripes. Put 3 stripes of tomato on each plate and drip some dill oil between them. Carefully lift up the dessert rings and serve the tartare with linseed bread.
3.1
http://mybites.de/2011/09/steak-tartare-bell-pepper-coulis-mustard-tomato-dill-oil/