If you open a cookbook about classic french cooking you will find recipes for several sauces. Except for vinaigrettes, almost all sauces contain either milk, eggs or animal bones. So while I was exploring vegan cooking, my idea was to figure out whether it is possible to create a rich brown sauce by using vegetables only. My result was more than satisfactory. I didn’t taste the same as sauces prepared with animal parts, but this rich vegan brown sauce works great for coating or glazing baked or roasted vegetables. 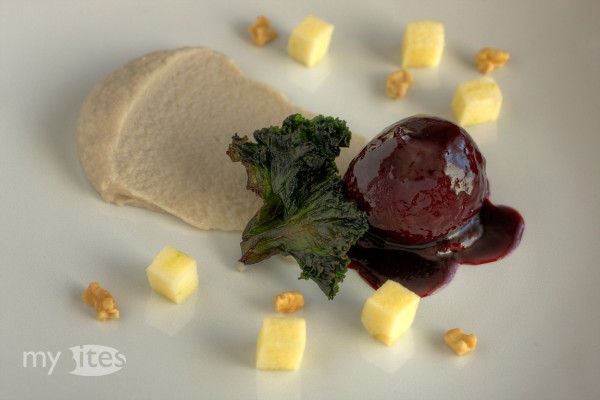 I cooked my base stock for the sauce as usual but this time I skipped the bones and meat. Cooking the stock overnight is my preferred method, because this way I save a lot of time and during the night the vegetables caramelize completely. This also helps to develop a deep brown color, which is further enhanced by reducing the stock until syrupy. Because the stock is radically reduced, not only the pleasant flavors are intensified. So if you plan to prepare a vegan brown sauce, you should roast your vegetables carefully, because any burnt parts may turn your sauce bitter.

Another pleasant discovery I made in this dish was the salsify baked in its skin. Usually, peeling and cooking salsify is a very sticky task due to the glue-like white fluid of raw salsify. Adding some milk to the cooking liquid helps to keep the kitchenware less sticky, but because I planned to prepare a vegan meal, I had to skip the milk. My idea was to wrap the salsify in aluminium foil and bake it in the oven. I had no concerns about overcooking the salsify, because I intended to use it as a puree. After baking, the salsify was not only easy to peel and not sticky at all, but it also developed a marvelous slightly nutty flavor which I haven’t experienced before with other preparations.

I garnished the dish with some classic pairings of red beets such as tart apple cubes and roasted walnuts. I adapted the idea of the kale chips from my previous discovery when I baked marinated kale along with a whole char and sweet potatoes. Since then, Ideas in Food came across the same idea of kale chips too. Similarly as in my previous kale chip recipe, I further enhanced the nori-like taste by marinating the blanched leaves with some soy sauce. It also served as a kind of spicy element on the plate. 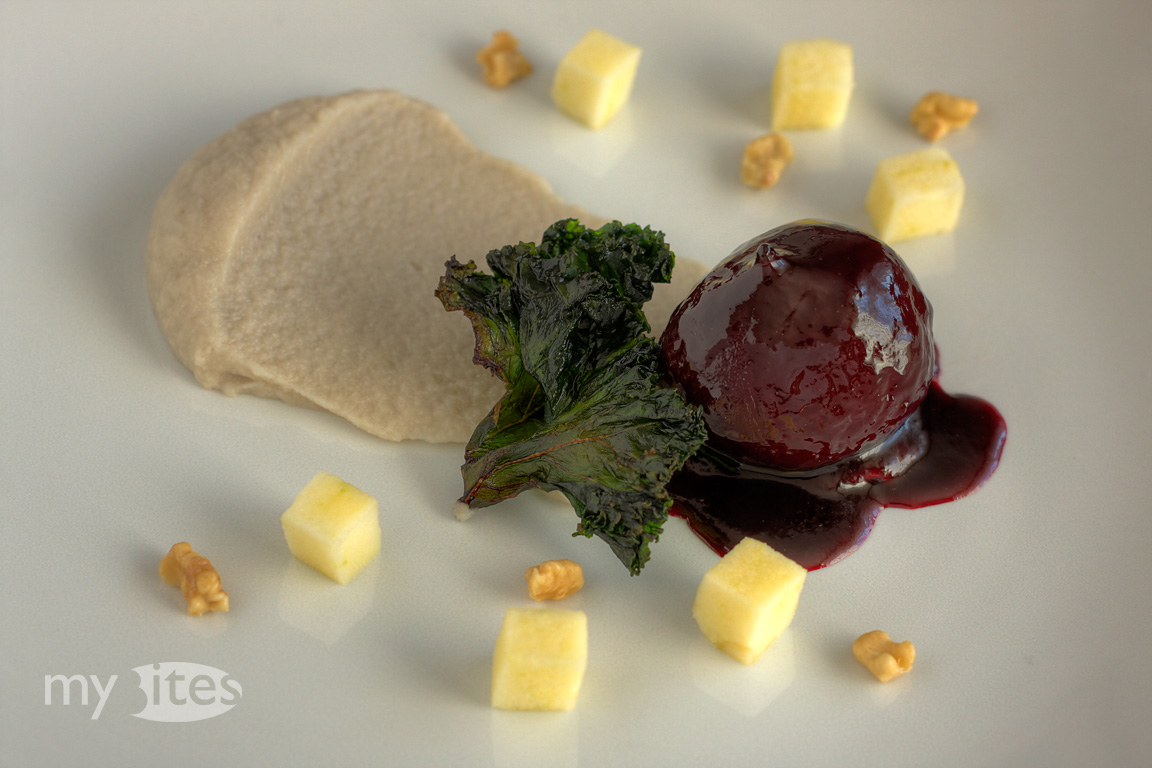 For the sauce
Wash the onion, carrot, parsley root, celery root and cut into cubes. In a large pot brown the diced vegetables on some sunflower seed oil in batches. Always add only a single layer of vegetables to the pot so it browns and doesn't cook, then set aside and continue with the next portion of vegetables. Finely dice the tomato and roast in the pot until brown and caramelized. Add about 200ml water and scrape off the brown parts from the bottom of the pot. Add the roasted vegetables, 1 garlic clove, the celery and parsley greens, 1/2 diced quince with its skin and seeds, 1/2 tbsp whole black peppercorns and a pinch of salt. Add just enough water to cover the vegetables. Cover with a lid and bake in the oven at 100°C / 210 F for 8 hours.
On the next day, strain the liquid and discard the vegetables. Slowly reduce the brown vegetable stock on moderate heat until it starts to get syrupy. Add the beet juice, mix well and reduce again until syrupy. Season with salt and sugar. Keep warm.
For the cashew-salsify puree
If the cashew nuts are salted already, wash off the salt with cold water. Put the cashew nuts in a plastic box, cover with 250ml cold water and refrigerate overnight. On the next day, drain the water, transfer the soaked nuts into a small pot and add just enough water to cover them. Cover and cook over low heat for 2-3 hours until the nuts are soft. Drain and reserve the cooking liquid.
Wash the salsify thoroughly to remove all earth. Wrap in aluminium foil and bake in the oven at 200°C / 390 F for an hour. Peel the salsify while still warm and remove any black dots. Blend the white salsify with the drained cashew nuts. Add as much cashew cooking liquid as needed to form a fine puree. Season with salt, nutmeg and 1-2 drops of chili oil. Keep warm.
For the glazed beets
Wash the red beets, wrap in aluminium foil and bake in the oven at 200°C / 390 F for an hour. Remove from the oven and chill to room temperature. Remove the foil, peel and wash shortly with cold water to remove any skin pieces. Add the beets to the sauce. Warm over low heat periodically spooning some sauce over the beets.
For the kale chips
Wash the kale and pick off the leaves in bitesize pieces from the stems. Submerge in hot boiling salted water for 10 seconds, drain and chill in ice water. Gather all leaves, form a ball and press out the liquid from the leaves. Take the leaves apart and let dry on the working surface for 10 minutes. Transfer the kale to a bowl and toss with the sesame oil and soy sauce. Marinate for 10 minutes, then bake in the oven at 200°C / 390 F until crispy.
For the garnish
Clean the walnuts and roast in the oven at 200°C / 390 F until golden. Peel off the bitter skins.
Wash and peel the apple and cut into 1cm cubes.
To serve
Spread 1 tbsp puree on warm plates and add a glazed beet at its end. Add some apple cubes and walnut pieces. Cover the beet with sauce and garnish with a kale chip.
3.1
http://mybites.de/2011/12/beets-cashew-salsify-puree-apple-walnut-kale-chips/