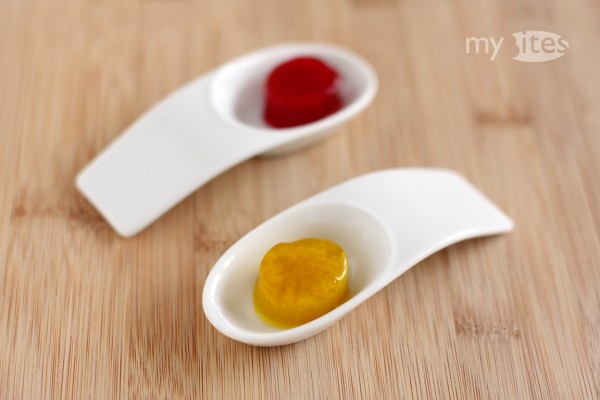 Unfortunately, golden beets are very hard to get in Germany, especially in the town I live in. After a three-year long search for golden beets, Noémi sent me some beautiful exemplars from Switzerland. I immediately tried Heston’s recipe for yellow beet jellies, but unfortunately I failed in my very first attempt. After juicing the raw golden beets, the resulting yellow juice turned grey. This discoloration continued while the gelatine set and the yellow jelly turned black. I haven’t found any clues in Heston’s recipe why this discoloration happened, but I assume it was caused by a combination of oxidation and chopping the golden beets very finely in the juicer.

To my biggest surprise I spotted yellow and chioggia beets at the local market recently on a Friday afternoon – the first time in 10 years since I moved to Erlangen. I asked my greengrocer several times whether she could get golden beets or if she knew someone who would grow it. Now she explained to me that golden and chioggia beets were sold in 25kg batches, which was far too much for her to handle. The local Franconian people are very traditional regarding food and most of them don’t like to experiment with new or different ingredients. Now that the golden and chioggia beets were sold in 5kg batches, she bought one of each. Though, it seems like I’m the only buyer of the colorful beets, so it’s possible that they will disappear for a longer period from the local market. At least I bought two huge yellow beets for my second attempt on Heston’s yellow beet jelly.

Based on my first negative experiences, to prevent discoloration I rubbed the juicer’s sieve with lemon and added a few drops of lemon juice to the bin where the juice was collected. This small amount of lemon juice didn’t affect the taste of the juiced beets but successfully prevented it from turning grey or black. I also managed to get some deep red blood oranges which I turned into a red jelly. Blood oranges tend to get more and more red the closer they get to the end of their season. Because I don’t own a silicon mold with small sphere or cylinder forms, I lined a small dish with clingfilm and set the gelatine in the dish. Afterwards I used a round cookie cutter with a small diameter to cut out flat cylinders. For a shiny and smooth surface I used a kitchen blowtorch to smooth the edges of the cylinders. So after several years, I finally managed to recreate Heston’s “joke”: Orange and Beetroot Jelly – I recommend you to start with the orange. 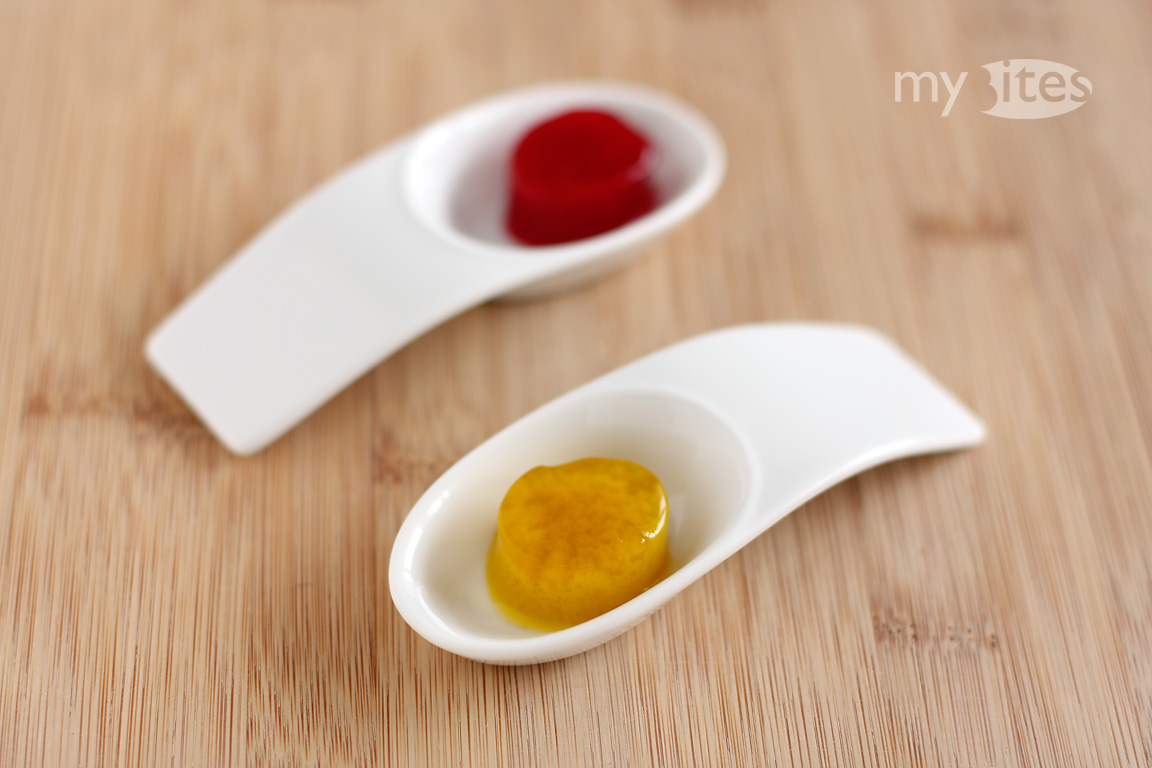