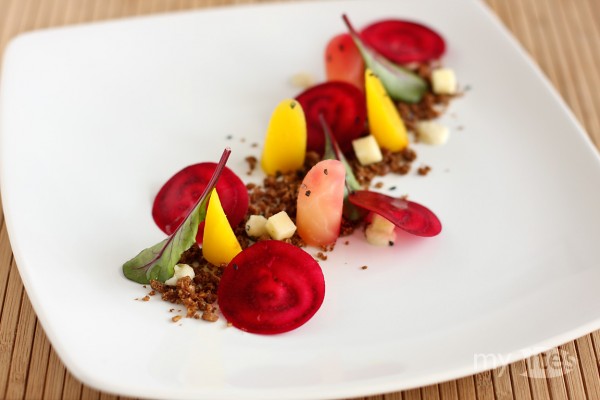 In winter 2009 I visited Berlin and looked at several places for golden beetroot. Finally, in one of the largest and most famous stores of Germany I received an answer that they actually do have golden beets, but not on that particular day. They offered me to order some, but because I stayed in Berlin for a weekend only, this was no option for me. Later I asked at every single stall at the famous Viktualienmarkt in Munich for golden beets. Only one lady could answer my question: she told me that they actually had some, but the season for golden beets is very short and it was already over.

In April 2010 Zsé, a dear reader of my blog and the writer of the Hungarian foodblog Avec le vent du Sud, mailed me a packet with crops for golden beets. I asked one of my colleagues if she could plant them for me in her garden (since I don’t own one), but unfortunately the crops didn’t grew at all. Another colleague offered me that one of his friends could bring me some beets, but only in batches of 10kg. This was far too much, so I cancelled my request. I also asked my local greengrocer if she had any friends who plant and grow beets in different varieties, but unfortunately she couldn’t help me either.

This winter Noémi, my right hand at the ZEIT cooking competition last summer and the writer of the ingenious foodblog Almond Corner, told me that she would send a packet with golden beets to me from Switzerland whenever I’d like to have them. First I disposed my tv and bought a vegetable juicer in its place and after Christmas (and actually 3 years of searching) the day finally came when I opened the packet from Noémi filled with golden and white beets and purple carrots. Once again, thank you Noémi for the colorful vegetables! I used the colorful beets in the appetizer below.

The salad is pretty simple, though it features several flavors and textures which present the versatility and the varieties of beets from different perspectives. I baked the yellow and white beets in the oven and cut tubes from them using an apple core remover. Afterwards, I seasoned them with some Hawaiian black salt only. Inspired by René Redzepi, I used the traditional red beet as raw chips. I sliced them very thinly and placed them on ice cubes to crisp them. On the plate I seasoned them only with a drop of cinnamon oil each, which added a very interesting note and a pleasant twist. The beets were complemented by their traditional counterparts such as Pumpernickel, apple and walnut. The walnuts were incorporated into the kohlrabi puree as walnut oil. The puree on its own turned out really great, so I’ll definitely experiment with it further in the near future. To my opinion, kohlrabi works a lot better with walnut oil than butter or cream. Altogether the garnish helped to emphasize the distinct tastes of the different beets and kept the dish interesting until the last bite.

Getting back to where I started this post – I tried Heston’s funny and simple recipe as well. Unfortunately yet again I couldn’t get any truly bloody oranges, so my blood orange jelly turned out being bright red. Although I managed to extract the juice from the golden beets using my vegetable juicer, unfortunately the juice started to turn grey rapidly. Even worse was that while the jelly set, the yellow beetroot turned completely black. I haven’t figured out the reason for the discoloration yet. Of course I reread the recipe in the Fat Duck Cookbook, but Heston didn’t mention any lemon juice to be added to the beetroot juice to prevent oxidation or precooking the beets before juicing them. So finally, after 3+ years I was able to try the recipe for orange and beetroot jellies, but unfortunately I didn’t succeed. At least the salad was great and I loved the honey-sweet flavor of the golden and white beets. 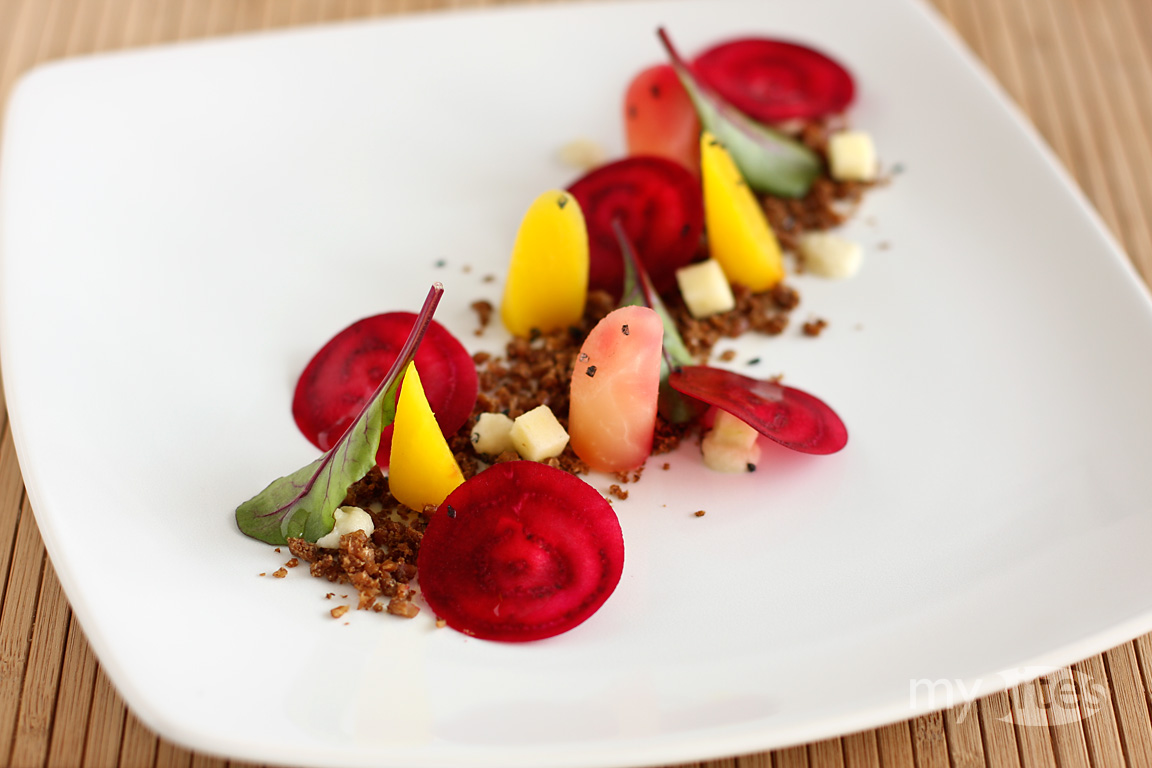 For the yellow and white beetroot
Wash the beetroots and dry with kitchen paper. Wrap the yellow and the white beetroot separately in aluminium foil and bake in the oven for 1 hour on the grid at 200C / 390F. Remove from the oven and chill to room temperature. Unwrap, peel and cut tubes using an apple core remover. Half the cylinders crosswise.
For the kohlrabi puree
Wash and peel the kohlrabi. Cook the peel in the vegetable stock for 20 minutes. Strain the liquid and discard the solids. Grate the kohlrabi and simmer in the vegetable stock at low heat until very soft. Strain and gently push out the liquid from the kohlrabi. Blend the kohlrabi with 1 tbsp walnut oil into a very smooth puree. Add as much cooking liquid as required to get a fine puree. Season the puree with salt and a drop of chili oil. Press through a fine sieve and reserve.
For the red beetroot
Wash and peel the beetroot 10 minutes before serving the dish. Using a mandoline, cut into very fine slices. Using a cookie cutter with a diameter of about 3-4cm cut the slices into circles. Place the beetroot slices on ice cubes to crisp them.
For the pumpernickel and the apple
Shortly blend the Pumpernickel in a blender to get crumbs. Wash and peel the apple. Cut into small cubes. Rinse the leaves in cold water and shake dry.
To serve
Put 3-4 tsp Pumpernickel crumbs on plates and place 4-5 halved beetroot tubes on top. Add several drops of kohlrabi puree and apple cubes. Cover 4-5 kohlrabi puree drops with slices of red beetroot and add 1 drop cinnamon oil on each. Season the plate with black salt and decorate with beetroot or chard leaves.
3.1
http://mybites.de/2012/03/colorful-beetroot-salad-on-pumpernickel-crumbs/