During the last month I finally managed to finish a huge project. Some of you, who might have seen me on Hungarian or German television might already know, that for the last 5 years I was working as a research assistant at the local university here in Erlangen. Next to teaching students about the beauty of computer science, I also worked on my PhD thesis. The final oral exam took place two weeks ago, where I did pretty well and so I finally extended my name with a Dr.! Of course the exam was followed by celebrations lasting more than 3 days, which seemed to be a little bit too much: I spent the next few days in bed with a flu.

The first PhD celebration is traditionally held just after the final oral exam with my family and my fellows. Since my colleagues know that I love cooking, I had to come up with some original ideas for my menu. Unfortunately, I didn’t have any time to cook on the day before my final exam, so I searched for a local catering service willing – and able – to cook the ideas I had in mind. The catering I picked did a tremendous job. Everybody loved the appetizers, main courses and desserts – which were mostly not only vegetarian, but vegan. It’s funny, that unless a dish is not explicitly emphasized as vegan, people don’t really seem to miss the meat from their plates. One of the appetizers was this simple, yet very tasty terrine made of bell peppers and eggplant. 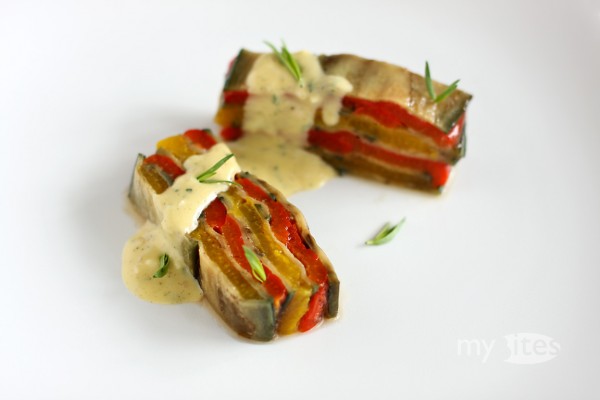 In contrast to the version of my catering service, my original terrine included not only more thoroughly baked bell peppers, but some garlic paste, coriander and cumin seeds as well. After layering the terrine, I chilled it in the refrigerator overnight. Since the bell peppers were lightly salted, they sweated some liquid during the night – but since bell peppers contain some pectin, too, these few drops of juice jelled and held the terrine together. I served the terrine slices with a mustard vinaigrette and a few young tarragon leaves. All the ingredients in the terrine are right now at their seasonal peak. The terrine works great as a refreshing appetizer, as a side dish or even as a main course. 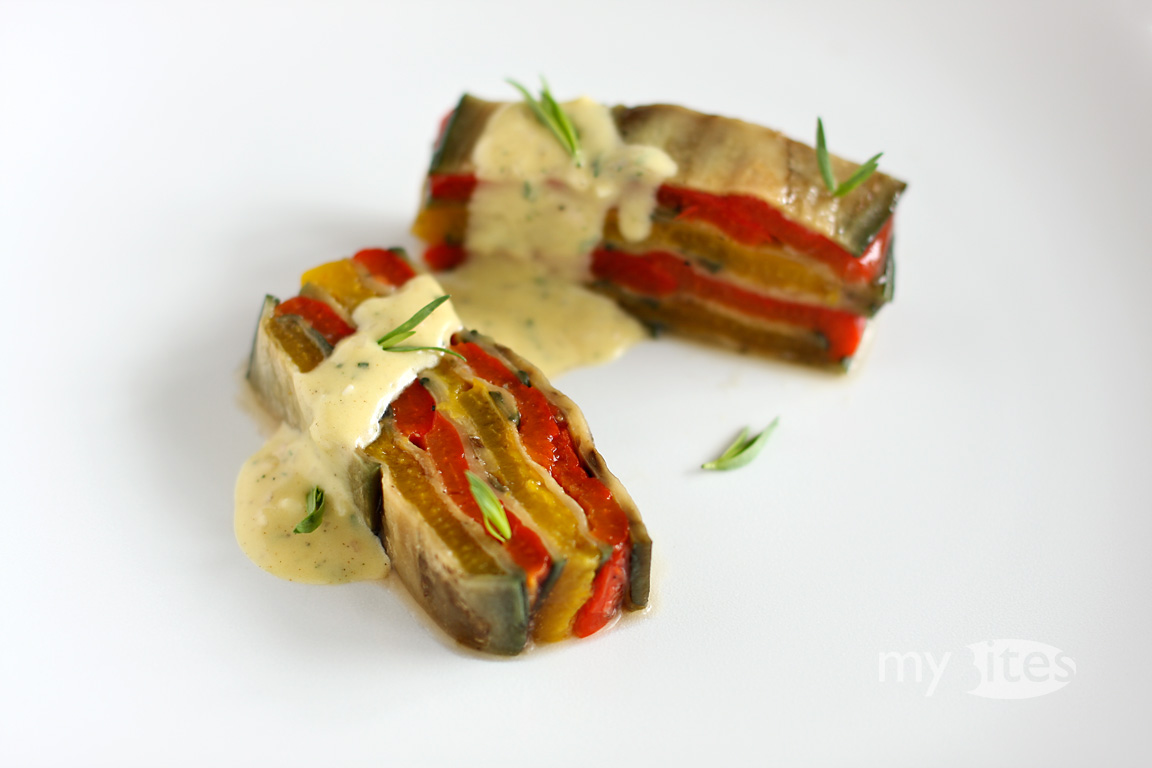 For the bell peppers
Wash the bell peppers, cut into quarters and discard the seeds. Cover a tray with parchment paper, add the peppers with their skin side up on it and bake in the oven under the grill at the highest possible temperature until the skins turn black. Remove the peppers from the oven, add to a small pot and cover immediately. Chill to room temperature. Peel the peppers and discard the skins. Season with salt and drain shortly.
For the garlic paste
Pour about 1 tbsp olive oil on the unpeeled garlic cloves and wrap in aluminium foil. Bake in the oven at 180°C / 360 F for 20-25 minutes or until soft. Remove the garlic and chill to room temperature. Peel the cloves and discard the skins. Add the garlic cloves along with the coriander and cumin seeds to a mortar and crush everything into a smooth paste. Season with slat and pepper.
For the eggplant
Wash the eggplant and cut into 3mm thin slices. Briefly roast each slice on both sides in a very hot pan with only a little olive oil. Season with salt and set the slices aside.
For the terrine
Line a rectangle-shaped plastic box with clingfilm. Spread one side of each eggplant slice thinly with garlic paste. Assemble the terrine by adding eggplant slices and bell peppers on top of each other. Cover the terrine with eggplant slices and chill the terrine overnight.
For the vinaigrette
Finely chop the shallot and add to a small glass. Pick the thyme leaves from the sprigs and chop very finely with the rosemary. Add the herbs to the shallot along with 1 tsp mustard, 2 tbsp vinegar, 6 tbsp olive oil, salt and pepper. Cover the glass with a lid and shake well. Chill the vinaigrette for 1-2 hours.
To serve
Remove the terrine from the box and cut into finger-thick slices using a very sharp knife. Arrange on plates and pour over the vinaigrette. Decorate with a few young tarragon leaves.
3.1
http://mybites.de/2012/08/bell-pepper-eggplant-terrine/